A voice of support for veterans with IBD

Army veteran and security subject matter expert Trei McMullen was finally diagnosed with ulcerative colitis when he was 26 years old, after struggling with symptoms since he was 18. Today, McMullen has joined the Crohn’s & Colitis Foundation’s Business Advisory Council and wants to help veterans understand the signs of IBD, learn to be open about their disease, and know there is help available out there. 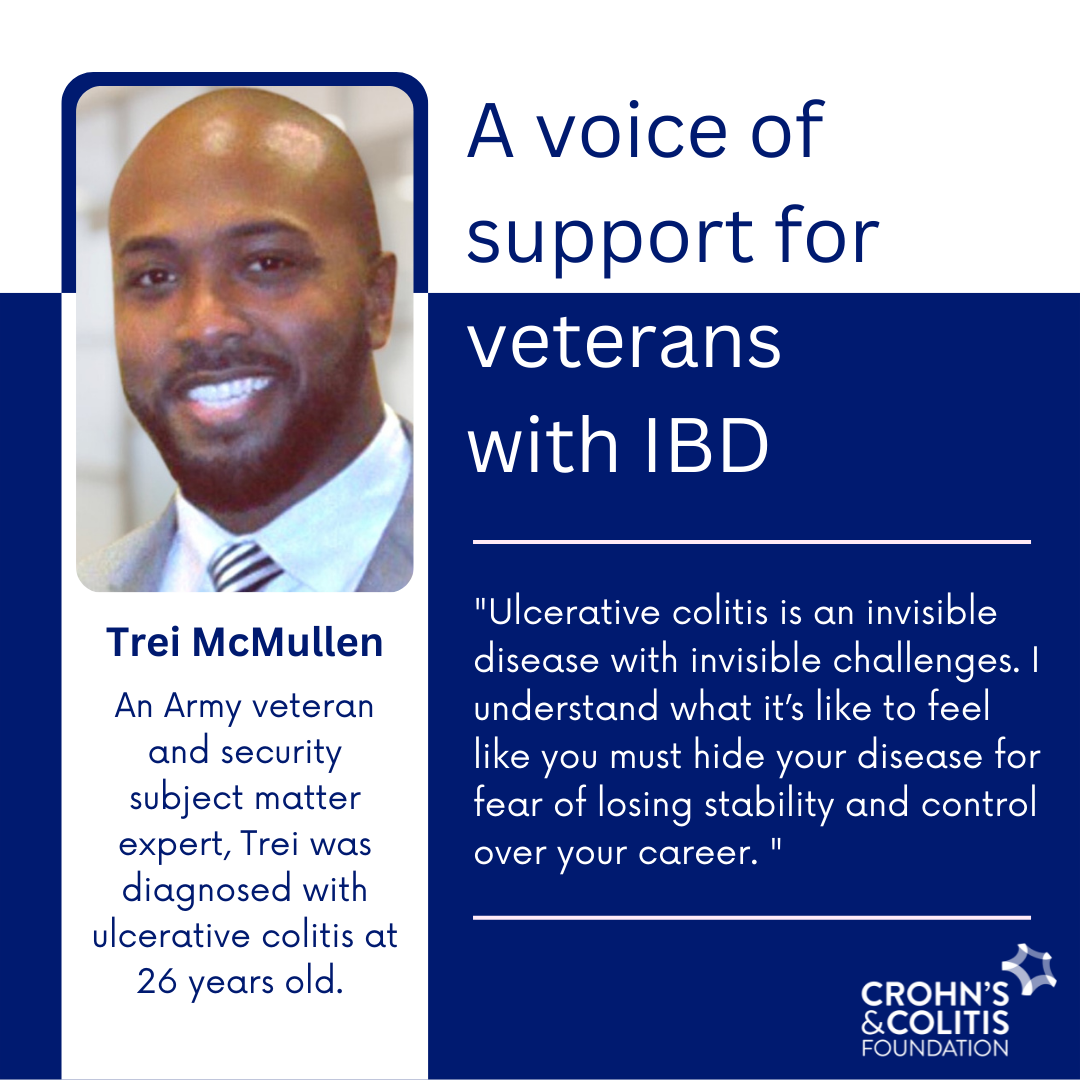 After high school, I joined the U.S. Army and for the next nine years I was deployed around the world, including to Germany, Iraq, and Afghanistan. For much of my tenure, my disease symptoms were not present, giving me a false sense of security. I would later learn that this isn’t a disease you can ignore; you need to seek medical attention.

When the symptoms came back, my life became a rollercoaster where I pushed through and hid my condition, including urgency and bleeding, as much as I could. I only saw a doctor as a last resort. Once I got a treatment that made me feel better, I tried to forget about it. But the symptoms always came back, even to the point where I had to be hospitalized for treatment, which usually included a blood transfusion.

I was 26 when I finally received a diagnosis of ulcerative colitis. By then, I was married with a  daughter and son. Ultimately, I had another health issue that really brought everything to a head. I had injured my leg on a jump. I had a small fracture that caused a blood clot in my leg, which again, I didn’t treat. I found myself in the hospital with one deep vein thrombosis in my left leg and one pulmonary embolism in my lungs.

After discussing my condition with my senior leadership, I decided it was best to medically retire, which allowed me to start contracting with other government agencies and open my own businesses, SYOTOS LLC and SYOTOS Technology. I was also able to continue my education, completing all my degrees (AA, BA, MA), and will complete my doctoral degree in global security at the American Military University in 2023.

Looking back on those years of keeping my condition a secret, I realize I wasn’t just toughing it out. I was in denial. I was worried about losing the career I had worked extremely hard for in the Army and having to leave my favorite thing to do, being a soldier. I didn’t want to be seen as damaged goods. I didn’t tell people even after I had a diagnosis and left the Army because it’s not an easy disease to talk about. I got good at making excuses as to why I couldn’t stay long at a meeting or go to certain locations where there was no accessible bathroom.

I didn’t realize how much loneliness there is in having this disease until I made the move to be more public about it and found out there are many others who have it too. When I first posted on social media and shared my story, I got more than 50 messages from people. Some were people I’ve known but never told who gave me their support, and others were people I didn’t know who thanked me for speaking up.

Now that I’ve decided to thrive with this condition, I hear from a lot of other people—veterans and those on active duty who share their struggles with me. It is estimated that there are over 66,000 veterans living with inflammatory bowel disease (IBD). 1

It’s easy for me to talk to them because I’ve been where they are. Ulcerative colitis is an invisible disease with invisible challenges. I understand what it’s like to feel like you must hide your disease for fear of losing stability and control over your career. You might have to make hard decisions about what you can do, and no one wants to do that.

I know what it’s like not to want to talk about your symptoms, even to your doctor, because it’s not a comfortable discussion to have. But if you don’t talk about it, you can’t get help, and you keep spiraling downward. I tell veterans and all people, "If you don’t try to control it, it will control you."

We need to bring Crohn’s disease and ulcerative colitis out into the open. The Crohn’s & Colitis Foundation has many resources for veterans to help them navigate their healthcare options and manage their disease symptoms. You can visit crohnscolitisfoundation.org/veterans to find perspectives from other veterans managing IBD and a link to a support group for veterans with IBD on Facebook.

I recently joined the Foundation’s Business Advisory Council to help make an impact. I hope I can empower veterans and all people to speak up about it, seek medical attention, and be open with their doctor. I want to be the voice against this disease for veterans.