Dealing with malnutrition and IBD

Food became my personal enemy during my freshman year of high school. When a brutal Crohn’s flare hit, I fell into a downward spiral of pain, confusion, and weight loss. My body began to reject all of the foods I once knew and loved, and my diet had whittled down to four foods that I deemed “safe.” I was already a petite individual, and I lost weight as fast as ice melted in the hot sun.

After just a few months, I lost almost half my body weight. It was an incredibly vicious cycle, as I needed good nutrition to help heal my flare, but all of the foods I consumed were being rejected by my body. I was quickly admitted to the hospital and placed on total parenteral nutrition (TPN) to give my intestines time to rest and heal. It took a weeks-long hospitalization to get my flare under control and start gaining weight again. The day I was taken off TPN I was filled with fear because it meant my GI tract would have to handle food once again.

It took several years, and help from a nutritionist, after that flare for me to recover from my malnourished state. My situation became even more complicated when I was diagnosed with another chronic illness called eosinophilic esophagitis (an allergic inflammatory disease of the esophagus), making my climb back to health even steeper. I was thankful to find a nutritional shake and other liquid food options that were compatible with my dietary restrictions, making the nourishment process possible.

Similar to IBD, malnutrition is often difficult to see from physical appearance alone. I felt my malnutrition in a variety of ways. I wore two pairs of sweatpants because my body wasn’t able to insulate itself. I experienced mood swings and anxiety due to a lack of vitamins and minerals. I suffered hair loss and weak nails. When I looked in the mirror, I did not recognize myself. 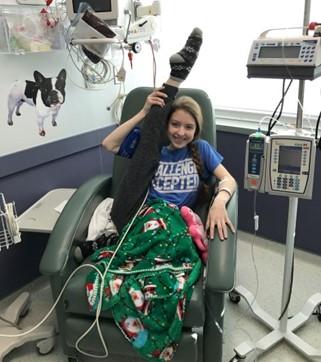 But one of the most difficult parts of dealing with malnutrition and Crohn’s was my inability to do what I loved to do most -- dance. As a longtime competitive dancer, I often relied on the sport as an outlet for stress and anxiety. Even now, anytime I feel overwhelmed, I find solace in the process of creating movement that reflects the thoughts that are jumbled in my mind. But when I became malnourished during my flare, I barely had the energy to get out of bed, let alone dance. That was devastating for me.

Malnutrition and Crohn’s don’t only affect your digestive system. They ravage through the entire body, infiltrating physical and mental spaces. If you think you might be malnourished, it’s important to talk to your healthcare provider and share your concerns with them. They can order tests to find out what vitamins or minerals you may be missing and help you get on the road to feeling better. By putting more attention on learning about and treating malnutrition, our bodies can cope even better with the unpredictable nature of IBD.

Macy Stahl is a Crohn's disease patient from Virginia and a member of the Foundation's National Council of College Leaders.