DINE-CD Study Results: Something to Chew on

Last month, we shared the results from the first-ever national study of diet interventions to manage Crohn’s disease symptoms. The Diet to INducE Remission in Crohn’s disease (DINE-CD) study was a randomized clinical trial that compares the Specific Carbohydrate Diet™ (SCD) to a Mediterranean style diet as a method for improving Crohn’s symptoms and patient quality of life.

“This was a very unique research opportunity because the DINE-CD study, in many ways, was proposed by patients,” says James Lewis, MD, MSCE, from the Perelman School of Medicine at the University of Pennsylvania. Dr. Lewis was the principal investigator of the study, which was funded by the Crohn’s & Colitis Foundation, the Patient-Centered Outcomes Research Institute (PCORI), the Flora L. Thornton Foundation, and from Dr. Lewis’ 2016 Sherman Prize.

Dr. Lewis and his colleagues – including administrative principal investigator Angela Dobes, MPH, of the Crohn’s & Colitis Foundation, and data management center director Robert Sandler, MD, MPH, of the University of North Carolina – leveraged the IBD Partners online community to find out what topics were of interest to patients. Effectiveness of dietary interventions to manage Crohn’s was highlighted as a topic that warranted investigation, and that led to the creation of the DINE-CD study.

The two diets compared in the study – the SCD™ and a Mediterranean style diet – are both thought to have the potential to improve IBD symptoms based on previous research. The SCD is one of many diets that patients ask us about when seeking to use diet to help manage their symptoms.

A Mediterranean style diet is known for its overall health benefits and has been linked to lower all-cause mortality and lower risk for developing heart disease and cancer in the general population. 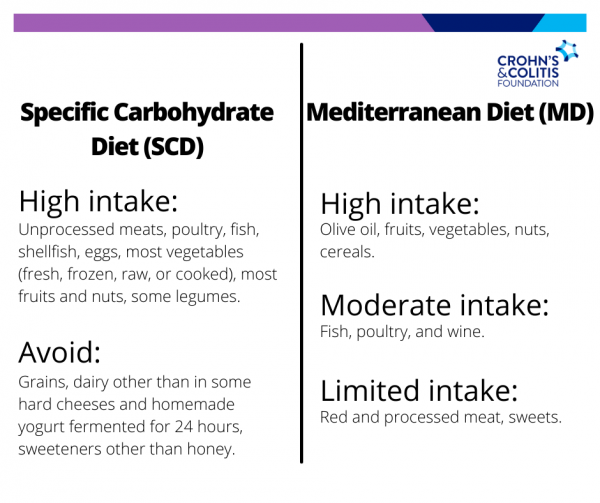 Patients were excluded from the study if they were pregnant, used the SCD within four weeks of screening, were taking more than 20mg of prednisone or a similar medication, or had a recent Clostridium difficile infection. Patients with an ostomy were excluded because a metric used to measure change in symptoms as a result of the diets required an assessment of bowel frequency. Additionally, patients with known strictures (narrowing in the intestine) were also excluded from the study because the diets included more fruits and vegetables than most people routinely eat, and this increased consumption could potentially cause a bowel obstruction or related complications.

For the first six weeks of the study, participants were provided all their meals (breakfast, lunch, dinner, and two snacks). In the second half of the study, participants had the option to purchase food from the vendor that supplied the first six weeks of meals or to cook their own food in accordance with their assigned diet. Dr. Lewis noted that most patients opted to prepare their own food.

Dr. Lewis noted the importance of how both diets included increased consumption of fruits and vegetables, and this was well-tolerated by participants. “Maybe what we’ve learned from this is that it is ok to recommend patients to go ahead and consume more fruits and vegetables,” he stated.

Looking toward the future

According to Dr. Lewis, this research opens the door to more tailored dietary recommendations and additional research into how best to leverage diet to improve the quality of life for IBD patient.

In 2019, the Foundation launched a Precision Nutrition Initiative to identify diets that have the potential to improve disease outcomes. We are currently funding research at four institutions across the world to evaluate the efficacy of anti-inflammatory diets; identify biomarkers of response to dietary interventions; identify dietary triggers of relapse, and develop artificial intelligence tools to predict response to foods and develop data-driven diets for the improvement of disease activity.

Through precision nutrition, we hope to be able to tailor diets based on patient’s biological, clinical and lifestyle characteristics to deliver the right diet to the right patient at the right time to improve patient outcomes.