Honoring my Uncle Ted by helping others with IBD

In October 2021, the Crohn’s & Colitis Foundation sent me an email to ask about a generous – yet puzzling – gift. The Foundation had recently received more than $500,000 from the estate of Ted Scholnick. The gift was unexpected, the Foundation had no known connection to Ted Scholnick, and it came without a single note or explanation. They only found me through researching Ted Scholnick’s obituary, as I was listed as a close relative of the deceased.

The Foundation had a simple question: why did my Uncle Ted make this donation? 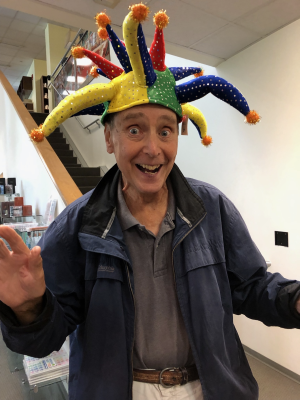 Theodore “Ted” Scholnick passed away on May 8, 2021, one day shy of his 80th birthday. Upon reviewing Ted’s estate, our family also was surprised to learn that the Crohn’s & Colitis Foundation received such a large bequest. Ted had spent his career running the family business, a small grocery store in Cambridge MA, but apparently he made very wise investments in his 20 years of retirement.

But to his family, it was easy to understand why Ted donated to the Foundation. Ted suffered from severe ileitis (now known as Crohn’s disease) since childhood. When he turned 18 years old, he and his parents decided it was best for him to undergo ostomy surgery, removing his inflamed large intestine and connecting him to an external pouch, known as an ostomy bag, to collect waste that his body could not process. For the rest of Ted’s life, he wore the ostomy bag and needed to manage the flare ups of his intestinal disease. Those who struggle with the disease or live with an ostomy bag can understand the profound impact of his experiences.

His gift delivers a message to others facing the same challenges he once faced: you are not alone.

I’m happy to tell you that while the intense experience of a chronic illness was one aspect of Ted’s life, it was by no means the whole of it. He enjoyed travel, sports, and shared a wonderful and intimate relationship with his late partner, Linda McIntosh. To my brothers and me, he was also a deeply beloved uncle. Ted ended up moving beyond his Crohn’s disease and ostomy surgery to live a fulfilling life, and I think he made this generous bequest to help more young people, so they can do the same.

My Uncle Ted disliked talking about his gut experiences in his private life. My two brothers and I were very close to him, yet it wasn’t until we were adults that we found out about his ileitis. Ted’s reservation to speak on these topics, both in life and in passing – combined with his generous parting gift to the Foundation – made me wonder what it was he kept hidden from us, both the experience of the disease and his feelings about it.

I’d like to honor Uncle Ted’s memory by helping others manage what he dealt with his whole life. But I have a lot of questions – What exactly is IBD? What are its effects? What did Ted face as a patient? The Crohn’s & Colitis Foundation is going to help me find the answers. I recently sat down with Michael Osso, President & CEO of the Crohn’s & Colitis Foundation, to talk about IBD, Uncle Ted, and how we can all learn to become more comfortable talking about gut diseases.  Watch the full video below:

Helping others with IBD: Peter Sagal shares his Uncle Ted's legacy Peter Sagal in conversation with Michael Osso, President and CEO of the Crohn's & Colitis Foundation.

I’m grateful to have had my Uncle Ted in my life. Our family hopes Ted’s story and gift will be able to inspire others to lead rich and fulfilling lives like he did.

Peter Sagal is a writer and host of the NPR program "Wait Wait... Don't Tell Me!"