Learning what it means to be a caregiver

If you asked me when I was a 20-year-old college student where I’d see myself years down the road, I never would have thought I’d be a caregiver for someone with a chronic disease. When I was a junior in college, I met a guy. He knocked on the door to my apartment on move in day and asked for toilet paper. We didn’t start dating until six months later, but the story of how my husband Dan and I met is still one that we find funny to this day. 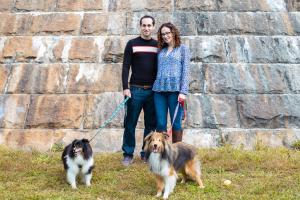 Dan was diagnosed with Crohn’s disease just two months after we started dating, six months after he asked me for toilet paper. The first few years he lived with the disease he was still under the care of his parents. I knew he was sick; I knew he had a digestive disease, but I didn’t really understand what his disease was and how serious it was.

In fact, I don’t think I fully grasped it until we were married, living two hours away from our support system, and I became his primary caregiver. We decided it was time to transfer his care to a doctor closer to us who scheduled a colonoscopy. It turns out that his disease had progressed to the point of creating a narrowing in his intestine. When the gastroenterologist went to push the scope through, she ended up perforating the wall of his intestine. Within 45 minutes of waking up from the procedure, Dan spiked a 104-degree fever and kept saying he felt like he was dying.

This was the first time I truly got how debilitating, devastating, and terrifying Crohn’s disease could be. And it was the first time I grasped what it meant to be a caregiver. I’ll never forget- the doctor wanted to rush him to get a CT scan to confirm the perforation but when they tried calling our insurance company, no one was answering the phone. I went on a warpath to get the scan approved as soon as possible. I wasn’t going to sit on the sideline and watch Dan get sicker and sicker while we waited for pre-certification. So, I authorized the scan without insurance approval and decided I would fight tooth and nail if they tried to deny coverage.

After the perforation, Dan was hospitalized two more times over the course of a year, including one when he had a bowel resection. These two hospitalizations occurred shortly after I started a new job. I was terrified that my new employer would look down on me for missing so much work. But I was lucky as they were willing to help me through this difficult period. They approved me working a modified schedule for two weeks – half remote and half taking time off. This allowed me to be present for Dan during his first two weeks healing after his surgery.

For six weeks post-surgery, I slept on an air mattress next to the bed as to not jostle him in my sleep. I set alarms and woke up throughout the night to make sure he took his medications as scheduled. I helped him bathe and use the bathroom. I forced him to go on short walks and cooked him special low fiber, low residue meals. He was in graduate school at the time, and I went on his behalf to his first class of the semester to get his syllabus and other materials.

For me, being a caregiver is a second full-time job. I celebrate the highs as if they were my own. I have spent hours on the phone with the insurance company fighting coverage denials. I found financial assistance programs to make sure we can afford his mediation. I have a close relationship with his doctor and ask the questions he doesn’t want to ask (such as when he is due for a colonoscopy). I put Dan’s needs ahead of my own, even when he’s in remission.

Here are my top three tips for other caregivers navigating their loved one's disease journey:

To all the other caregivers in the IBD community, you are amazing and I applaud you for your tireless efforts on behalf of your loved one. Caregivers are an essential member of an IBD patient's care team, and your impact is far greater than you realize.

Rebecca Kaplan is the Associate Director, Marketing & Communications for the Crohn's & Colitis Foundation and the caregiver of a Crohn's disease patient.

Thank you to our generous supporter: