Living with a heart transplant and IBD

Today is National Wear Red Day, which helps bring awareness to heart disease, and the start of Congenital Heart Defect Awareness Week. Now, when you think of Crohn’s disease, you don’t typically think of heart disease also. But I have experienced both.

I was born with a congenital heart defect (CHD). At seven weeks old, I had a pacemaker (a small device that help controls abnormal heart rhythms) placed and, other than yearly pediatric cardiology check-ups and surgeries to replace my pacemaker battery, life was pretty normal. I went to school, summer camp, was a Girl Scout, and enjoyed roughhousing with my older brother. 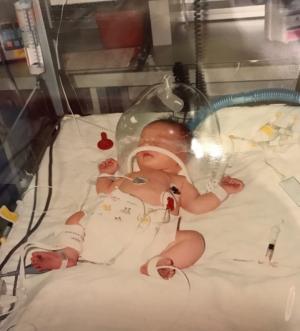 It was at a normal cardiology appointment when I was 14 that my family and I learned I’d need a heart transplant. At the time, being so young (and probably naïve), it didn’t seem like a big deal. To me, it was just another surgery. I know it was a lot harder on my parents and older brother, but I remained strong for them and they kept strong for me. Within a few weeks of learning I’d need a transplant, I was evaluated and put on the transplant list. Within days, we received the call they that had a heart for me.

I remember arriving to the hospital and a lot of the nurses saying, “Wow – you don’t look sick.” I was prepped and underwent a heart transplant at June 25, 2006. I am very lucky in the fact that I’ve done extremely well post-transplant. It’s been almost 14 years since I received my heart and I continue to have great check-ups.

It wasn’t until 2016, that I had my first major bump in the road post-transplant. It started with some eye issues – my eyes started to feel strained and sensitive to light. I just assumed I was staring at a screen for too long and bought blue-light glasses. I then noticed stomachaches that didn’t feel like a normal stomachache…it was more like a stab to the stomach and I’d have to stop what I was doing and breathe through it. I started having way too many bowel movements, losing weight, and my eyes continued to get worse.

I saw my transplant team and they thought maybe I’d contracted some virus. They started me on some medicines, and we were hopeful I’d feel better soon. But that wasn’t the case. I was still in a lot of pain and finally my transplant team referred me to a gastroenterologist. After many colonoscopies, tests and doctor visits, I was finally diagnosed with Crohn’s disease in 2017. 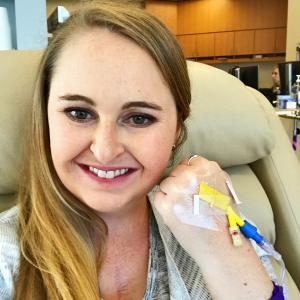 I’ll be honest, when I was diagnosed – I was thankful to have an answer, but I was extremely angry. I already had to deal with transplant appointments and now I’d have to deal with GI appointments. As a 25-year-old, who was about to get kicked off my parents’ insurance, it was terrifying.

What a lot of people don’t realize is that IBD patients have a higher risk of developing certain heart conditions, such as coronary artery disease, stroke, and venous thromboembolism (blood clots). While my heart condition came long before I developed Crohn’s disease, I think it’s important that we raise awareness of the risk and take steps to ensure that our hearts are healthy by regular monitoring of our blood pressure, weight, cholesterol, and more. And remember, just because there is an increased risk does not mean you will develop a heart condition!

It’s been four years since my Crohn's diagnosis, and last week I found out I’m in remission. I'm thankful for the support I've received, both through my journey with CHD and now with Crohn's disease. My family and husband have been biggest supporters and continue to be. It can be a lot at times – a lot of doctor appointments, blood tests, EKGs, colonoscopies, medicines, bills, calls to my insurance company, and sometimes tears, but I’ve learned a lot. I’ve learned I’m a lot stronger than I ever thought I was.