What it’s like to live with IBD around the world

More than 10 million people worldwide live with Crohn’s disease or ulcerative colitis. Living with these diseases is very individual and no patient experiences the same symptoms or manifestations of disease. But what bonds everyone — regardless of whether they live in the United States, India, Australia, or anywhere in between — is the similar challenges they face and the mental impact of these diseases. 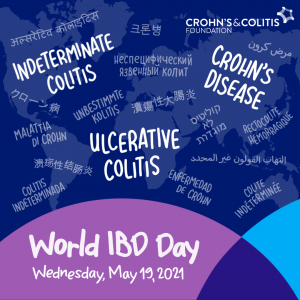 The Crohn’s & Colitis Foundation brings together the largest community of IBD patients in the United States, and we engage them in the fight against Crohn’s and colitis. On World IBD Day, we are proud to stand with our partners from 50 countries on five continents in supporting those living with Crohn’s and colitis around the world.

To gain a deeper understanding of the challenges patients from outside of the United States encounter throughout the course of their disease journey, we spoke with patients from Brazil, Canada, China, India, Kazakhstan, Poland, and Zimbabwe. Here’s what they had to say:

“In Brazil, there is a public healthcare system; however, I find that having private insurance is still necessary, especially for medications, exams, and hospitalizations. I could still get the basic medication through the public system, but the long waiting lists could worsen my condition. I still need to count on the public system when it comes to providing the specific items, like ostomy pouches and creams, which are needed due to a colostomy that I have. On that point, the governmental help has been very important due to the high costs associated with my condition.”

“When I typed my symptoms into a search engine, I first learned about Crohn’s disease and ulcerative colitis. I went to see my doctor, and soon after I started taking prescription anti-diarrheal medications and received an appointment for a barium enema exam three months away. That delay in having a needed exam was my first issue in accessing care and wait times for exams like these remain one of the challenges facing Canada’s healthcare system...There’s a need for more specialists in Canada to ease wait times for patients, and ease the workload our existing gastroenterologists already shoulder. For people with IBD in rural Canada, the limited number of specialists is even more of concern.

Prescription drug coverage isn’t universal in Canada, so that can pose challenges to care, especially when expensive medications are involved. But I’ve collectively spent about two months in hospital because of my IBD, and I’ve never received a bill for that care. I can’t express how grateful I am for that privilege.”

“Getting diagnosed with a chronic illness can be devastating. It could be scary to realize that I am dealing with a health issue that may never go away. Beyond the physical setbacks, I also had to struggle with my mental health, specifically depression, when I felt stressed or depressed I experienced more or worse symptoms…Now I am getting better, my life has improved and returned to normal. I took up reading, drawing, meditation, and really anything to keep my mind busy and to allow my body to take a break. Finally, I could have dinner with my family and friends and hang out with families and friends. Crohn’s has taken part of my health, but through the China Crohn’s and Colitis Foundation I made many friends who have taught me what true compassion and selflessness look like.”

“The biggest trauma which I and many UC patients [in India] deal with is when people don’t understand problem and make fun of the regular visits to the restroom. Even my close friends and family members joke about it and laugh upon seeing my panic and desperation while looking for the bathroom when we go out or after a meal. It’s extremely hurtful when people make fun of your situation without any understanding of the underlying cause.
My mother was concerned about my marriage. Who will marry me? My parents were also concerned about people talking. Everyday my mother asked me to go for a walk and gave me food she thought is suitable for UC. But she worried whole day whole night about what my life will be, who will marry me, and what people will say.”

“My story begins in January 2008 when I first came to hospital with a suspected infection. Eleven years ago, almost no one knew about ulcerative colitis in Kazakhstan. But I was very lucky. Getting the right diagnosis took a relatively short time, a little more than a month. But it took much longer to become stable with my health condition.”

“I was diagnosed with IBD at the age of 20 and then my life turned upside down. Endless hospitalizations and consultations with specialists, searching for a right doctor, a lot of stress, and tons of medicines. I was terrified of what would come next. I was on steroids many times so I put a lot on weight. I didn't feel like myself anymore and I hated the body I was stuck in. Unfortunately that was not the end, since in some people autoimmune diseases like to coexist with others. I was diagnosed with another autoimmune disease that affected my joints, spine, thyroid, eyes, ovaries, and skin. Even though I looked like a normal, healthy woman outside, I was struggling with constant pain and fatigue almost all the time. But I had to deal with my disease so I could move on with my life and feel normal again.

My life will never be the same as before my diagnosis. I had to change everything my personal life, diet, and even my job. I am not like other people my age; my life is completely different. Nevertheless, I try to be the best version of myself and enjoy every moment of my life.”

“Living with IBD in Zimbabwe has been painful for me. Not only do I have to deal with the physical pain, but I also must deal with family members who have their own opinions and believed my disease was not a normal illness but rather someone using black magic on me. Because of this, we went to traditional healers who applied traditional herbs, and had me drink wild roots and eat ants to remove the 'bad spirits.' Nothing worked and all it brought about was pain and division in my family since some family members and close neighbors were accused of causing my illness.

When I first had surgery, I was using plastic bags on my stoma because I didn’t know there were ostomy appliances I could use. A year later, I got in touch with ILCO Sweden and they started sending ostomy appliances. I began sharing the supplies with other patients in Zimbabwe, formed support groups in six provinces, and created ILCO Zimbabwe, the only organization in Zimbabwe that assists ostomates.

I have met more people who have gone through worse situations than I have. Patients here still go through issues with non-supportive parents, family members, and in-laws. Some of them are disowned, breadwinners in the family, orphans and old age, divorced and left to struggle on their own. It’s even worse for women with IBD in Africa—it’s either you get divorced or your husband finds a second wife.”

An older version of this blog post originally appeared on Medium.

Michael Osso is the President & CEO of the Crohn's & Colitis Foundation.