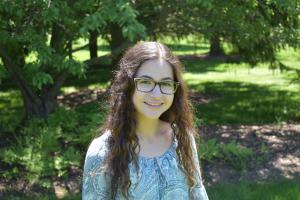 Hi! My name is Abby Mann and I am a freshman at Lake Forest College. I am planning to major in psychology in hopes of pursuing a career in mental health as a therapist. After years of struggling with debilitating symptoms, I was diagnosed with Crohn’s disease at age 10 and perianal Crohn’s disease at age 14. I was initially put on a combination of immunosuppressants and steroids, but getting my disease into remission was a challenge. As the severity of my disease progressed, I was put on a biologic and a new immunosuppressant drug, but medication alone wasn’t enough to treat my IBD. I continued to develop abscesses, fistulas, bowel obstructions, and other complications that made surgery a frequent occurrence in my life. After many failed treatments and surgeries, I got an ileostomy bag soon after my 15th birthday, which was switched to a colostomy bag after my 18th birthday because of numerous unsuccessful revisions and bowel resections. Four years later, I still struggle to accept my body with an ostomy, but it is starting to get easier because I recognize the relief that it brings me with the combination of my other medications. The mental and emotional components of living with IBD may be more impactful than the disease itself. While I vividly remember some of my experiences, how I felt in the moment is what stands out. I learned to suppress the terrifying memories to survive the all too familiar moments. Even though the events are in the past, they continue to play out on my IBD journey. I believe that mental health is equally as important as physical health, which is why raising awareness and decreasing the stigma surrounding it is important, especially for those fighting chronic illnesses. Throughout my struggles, I learned resilience, perseverance, and found a purpose when my struggles seemed meaningless. My dedication and commitment to the Foundation has grown immensely and I found solace in making a difference for others battling Crohn’s disease and ulcerative colitis. I am thankful for all of the support that I continue to receive and am committed to supporting others; nobody is alone, despite how isolating IBD may feel. I am an active participant in Chicagoland Take Steps and was the Glenview Take Steps Honored Hero in 2017. My team, Kickin’ Crohn’s, has raised over $30,000 and is one of the top fundraising teams in my area. I am committed to leaving an impact on IBD warriors, caregivers, and the community at large because Crohn’s disease and ulcerative colitis deserve acknowledgement and recognition. I believe that everyone is capable of cultivating change, even what may seem like a small contribution makes an impact. I am grateful to be a member of the NCCL and make new friends while advocating, educating, and raising awareness for IBD. Together, we will fight and find a cure.