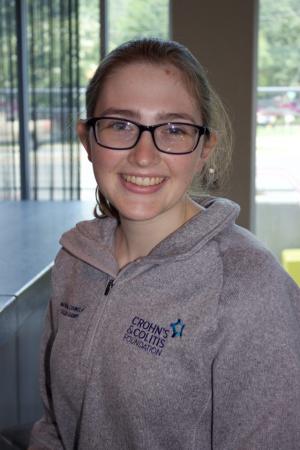 My name is Aleah and I am a senior at the University of Washington in Seattle. I am studying Bioengineering and hope to use this degree to work in the medical field. I was diagnosed with ulcerative colitis when I was 14 after a long month of trying to figure out what was wrong. I started the SCD diet and medication. I tried a lot of different medicines over the next four years, some did not work and others I had severe reactions too. The diet helped me control my symptoms, but it was not able to keep me in remission. After that my best option was a surgery to remove my entire colon. Luckily, I had a friend from Camp Oasis who had gone through the surgery already and she was able to help prepare me and give me advice. I also had friends from camp that were on the diet who I could talk to about the struggles of being on such a restrictive diet. If I had not had them to talk to and ask for help, it would have been much more difficult. Patients can help each other so much and I want to help anyone who needs it as well. After my surgery, I have had an additional surgery to construct a J-Pouch to act as an internal alternative to an ostomy bag. Since then my diagnosis has also been changed to Crohn's.