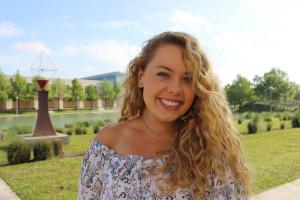 School: The University of Texas

Hi! My name is Caitlin Rowley and I’m a senior at the University of Texas at Austin. I am studying Health and Society with the hope of pursuing a career in federal health policy.

After months of relentless and painful symptoms, I was diagnosed with Crohn’s disease my freshman year of high school. I was immediately put on a biologic and tried my best to live like a “normal” high schooler. However, a few months after my diagnosis, I had a bowel perforation and an emergency resectioning surgery. I awoke in critical condition with an ileostomy bag, and was not able to go back to school the whole second semester due to poor health and extended hospital stays. Luckily, six months later, I was able to undergo an ostomy reversal surgery and have been ostomy-free ever since! Shortly after, I began infusions again and was able to continue throughout high school with relatively few complications.

Though Crohn’s has brought a lot of darkness in my life, it has brought even more light. I first became involved with advocacy when I was brought on as a member of the Texas Children’s Hospital Patient Advisory Board. I was involved in a number of quality improvement initiatives throughout my high school years, and was able to use my voice and experience to positively impact other patient’s lives. That same year, I got involved with the Crohn's and Colitis Foundation and Take Steps Houston. My team, “Caitlin’s Crew,” dove head first into advocacy and fundraising. In 2015, I was selected as the Honored Hero and had the opportunity to use that platform to educate the public and spread even more awareness. I am so thankful for my community in Houston and their support over the years. I truly don’t know where I’d be without them!