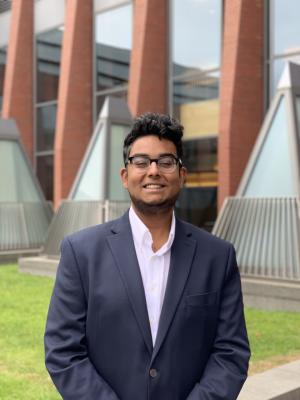 Hi! My name is Rik Bag, and I am a sophomore at the University of Pennsylvania. My journey with Crohn's Disease started at the beginning of my freshman year of high school at the age of 14 where I was initially required surgery to control the onset of the disease. Just a few months later, I was formally diagnosed with Crohn's and spent the next few years trying and failing different medications while dealing with a series of complications of Crohn's. Despite the hardships of the surgeries, procedures, blood tests, and hours of doctors' appointments, a silver lining was finding the Indiana Chapter of the Crohn's and Colitis Foundation. I first got involved with the Foundation leading up to their 2016 Take Steps Walk and have been speaking, fundraising, and representing the organization ever since. I received the chance to serve as the chapter's Honored Hero for the 2017 calendar year and had the opportunity to continue to educate and fundraise while also being actively involved in the planning and logistics of events the chapter ran

Since my diagnosis, I've been intrigued by the dynamics of the healthcare industry and have gotten a unique perspective on the industry as a patient on the relationships between patients with providers, payers, drug manufacturers, and government entities. As a student, I am interested in having a holistic view of healthcare, with a particular interest in the complex economics of the industry that forms from the variety of players.

I am excited to continue to raise awareness for IBD and fundraise for the Foundation as part of the NCCL alongside the incredible student leaders that make up the Council.