Focusing on a Cure:

Wendi & Ira Silverman & Family’s Journey with Crohn’s & Colitis. Check out The Inside Chappaqua Press article to read their touching story 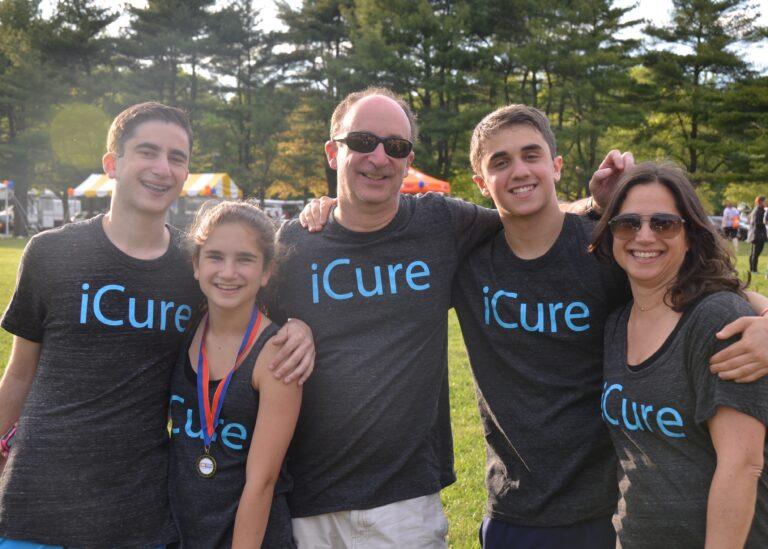 In March of 2007, everything changed for the Silverman family of Chappaqua when a pediatric gastroenterologist somberly said, “Your son, Josh, has Crohn’s disease.” For the five months leading up to that day, Ira and Wendi Silverman had helplessly watched their ten-year-old son grapple with unexplained weight loss and flu-like symptoms. After receiving this diagnosis, the three of them drove home in silence; scared, stunned, and confused.

That fateful day in March was the beginning of an uncertain and turbulent time for Josh and their family. Josh’s path with Crohn’s was difficult, because the disease’s onset occurred at such a young age and IBD is organically a difficult illness to manage. Now 24, Josh has dealt with an endless cocktail of medications, countless missed days of school, doctor’s appointments, two major surgeries, multiple hospital stays, and early on, nightly feeding tube nourishment to help him thrive.  Looking for a way to channel their fear into action, the Silvermans reached out to the Crohn’s & Colitis Foundation at the urging of a total stranger- and neighbor.

“On the very afternoon of Josh’s diagnosis, I walked through the front door of our town’s Dunkin’ Donuts and ran into a dear friend,” said Wendi.  Overwhelmed, I shared Josh’s diagnosis with her. Just as this friend was telling me about another mom in town whose son had Crohn’s, that very mom was pushing open Dunkin Donut’s back door. Then, for the second time that day, she altered my life with a few words- ‘Join me tomorrow night for a parent support group’.  And just like that our relationship with the Crohn’s and Colitis Foundation was born.”

The mission of the Crohn’s & Colitis Foundation is to find cures for Crohn’s disease and ulcerative colitis and improve the lives of children and adults affected by these diseases. Founded in 1967, the organization has played a role in every major breakthrough in inflammatory bowel disease (IBD) research, investing more than $384 million into finding causes, treatments, and cures. The Foundation supports healthcare practitioners from all specialty areas that serve patients with Crohn’s and colitis, including gastroenterologists, endocrinologists, colorectal surgeons, nutritionists, infusion specialists, mental health professionals and more, and offers a wide variety of resources including education and advocacy.

“The Foundation provides resources and guidance to patients from the very moment of diagnosis.  We are often the first call patients and caregivers make in order to get information about these diseases, understand medication and treatment options and find local doctors as well as emotional support.” said Lisa Harding, Senior Executive Director of the Crohn’s & Colitis Foundation, Connecticut/Westchester Chapter. “One of the largest roles we play is helping to educate the general public about these autoimmune diseases.  Because the symptoms can be embarrassing, patients are often left feeling alone.  We work to remove the stigma that often comes with diagnosis so that patients can feel accepted and confident as they live their everyday lives.”

Since that first phone call to the local chapter, the Foundation has supported the Silverman family emotionally and through patient education programming. And the Silvermans have thrown themselves into supporting the foundation as well. Ira’s began with the Golf committee where he’s volunteered for 14 years, serving as Chairman, a Board Member, and President, and raising over $4 million.  Wendi began as a volunteer for the Take Steps walk and then Walk Manager in three counties, and growing the chapter walk program by 121%.  Josh and his siblings, Matthew and Amanda, are also involved.  They were members of the Take Steps “Team ICure” each year where they fundraised and invited friends to attend the event.  Josh attended Camp Oasis, the one week “IBD” camp when he was 15 years old. Matthew ran a half marathon with Team Challenge in 2016 in honor of his brother and Amanda participated in Spin4 in 2020.

It is for this reason that the entire Silverman family, will be honored at this year’s “Focus on a Cure” Gala, the Foundation’s largest annual, fundraiser, and presented with the 2021 Modell Award.

“We are so thrilled to be able to honor the Silverman family,” said Harding, “Their involvement, contributions and impressive achievements underscore the family’s hard work, commitment to the mission and ability to inspire others. We joke that you can always count one or more of the Silverman family to be present at Foundation events to help set up, clean up, share their story, build awareness and make other families feel welcome.”

Today, Josh is a thriving adult and continues to exhibit the same strength, resilience, and determination that he learned as a young child dealing with chronic illness. “With Crohn’s disease it’s hard to know when someone is suffering because the symptoms aren’t ones that can be seen, says Josh. “My parents have supported me so much and once they saw how much help was needed in the community, they stretched their efforts to helping kids, teens and adults who are struggling. Because of their commitment, and the work of the Foundation, great advances have been made- and I hope there’s a cure in my lifetime.”