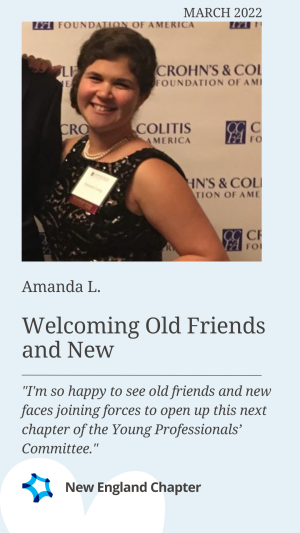 We are thrilled to introduce you to Amanda, our NEW Young Professionals’ Committee President. Her passion, enthusiasm, and drive for helping people is positively contagious! Like many of us who get involved with the Foundation, Amanda has a close connection to IBD.

After experiencing symptoms for over a year, Amanda was diagnosed with Crohn’s Disease in 2009 right before beginning her junior year of college. She was glad to finally have answers and options to treat the disease. Amanda did a lot of research online including where to find support. Every search led her to the Crohn’s & Colitis Foundation.

Amanda began volunteering for the New England Chapter in 2010 when she participated in a local TAKE STEPS event. Initially she did this to find her tribe of people in the IBD community. Over time, her mission has remained the same — to show up for herself and other IBD patients. She wants to make it okay for people not to be okay and believes no one should ever have to feel alone. This caring young woman knows there is power in numbers.

Fast forward to Amanda being connected with Jenna Wilson, New England Chapter Executive Director, and learning about the Chapter’s Young Professionals’ Committee. The two met in person to chat, and Jenna invited Amanda to an upcoming Committee meeting. Amanda immediately volunteered to be involved with the Night in White annual fundraising event. After becoming more and more involved over the years (which included discovering her passion for silent auctions), Amanda was nominated for Vice President. After several successful years in that role, she was nominated to serve as President and excitedly accepted the role in January 2022.

Why is this Committee so valuable to young professionals with connections to IBD? In Amanda’s opinion, it’s an incredibly unique space for like-minded people to come together and make a real difference. However young adults have been touched by IBD — whether they are patients, caregivers, or allies — they are welcome.

When she isn’t volunteering, Amanda works in fundraising at an academic medical center. She’s a regular at her local barre studio, likes skiing and traveling, loves to explore the local restaurant scene, and enjoys spending time with friends. Amanda lives in Brookline and is the proud Auntie of Finley, her brother’s adorable golden doodle. She’s also happy to be in remission for five years now and doesn’t take it for granted.

To learn more about the Young Professionals’ Committee, visit: www.crohnscolitisfoundation.org/ne-young-professionals-committee.