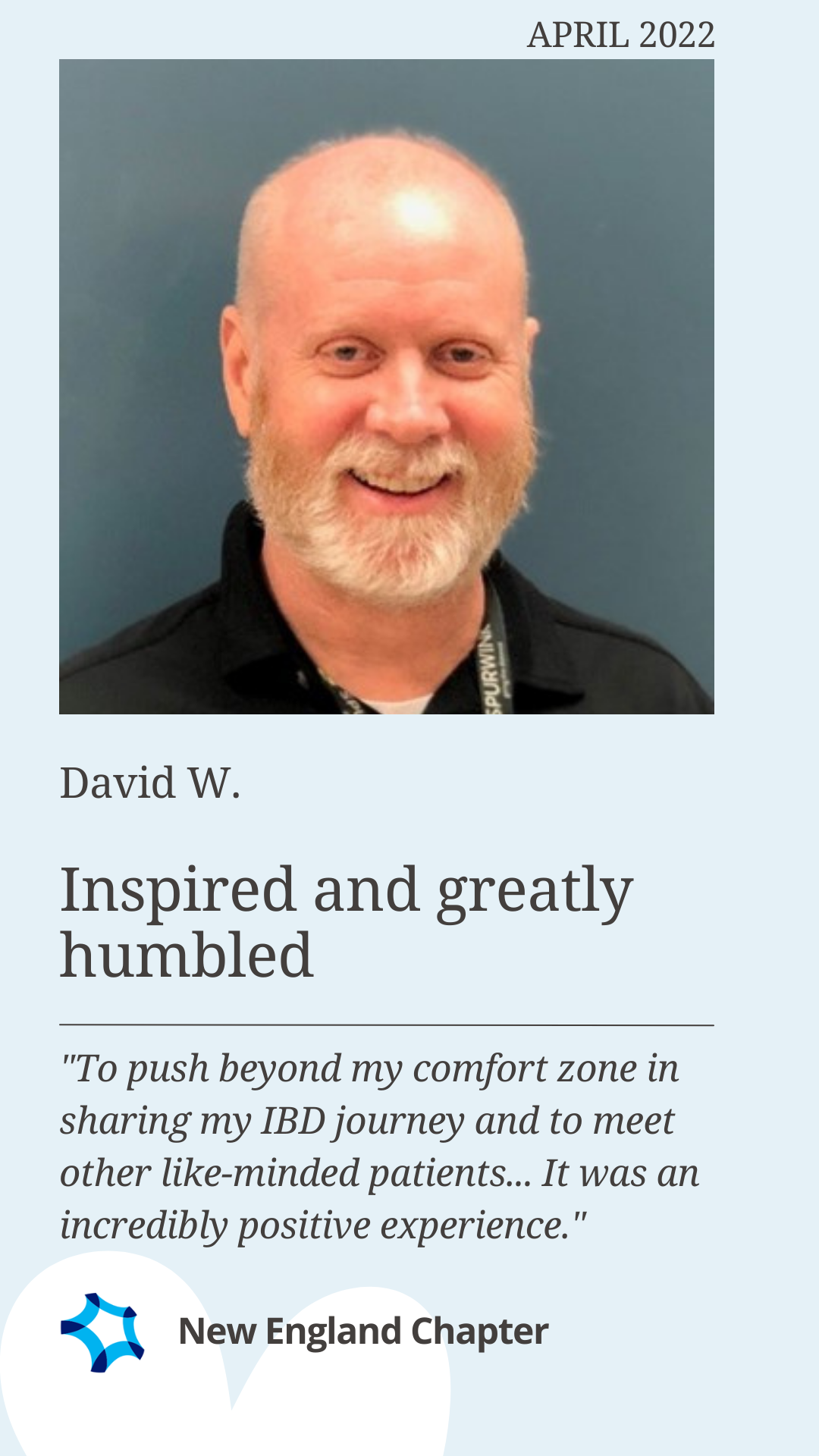 David has been a very active volunteer for the Crohn’s & Colitis Foundation’s New England Chapter since 2011. In addition to participating in fundraising events and programs, he’s also been a Support Group Co-Leader for over a decade. He remains deeply committed to supporting IBD patients and their caregivers.

David wasn’t diagnosed with any form of IBD for a long time. He recalled as a teen having periodic bouts of mild gastrointestinal (GI) symptoms that carried into his adulthood. David thought maybe he just had an irritable bowel issue.

In his early 40’s, he was put on a daily baby aspirin regimen for a separate medical issue. Time moved on while he continued taking the aspirin. Coincidentally, his GI symptoms worsened so much so that he saw a Gastroenterologist. After exams and procedures, he was diagnosed with Crohn’s Disease at age 46.

He was prescribed medication to treat the IBD. David felt like he was “on his own” trying to learn all he could about living with this disease and how others managed it. He searched “Crohn’s Disease” on the internet and found the National Foundation website. David discovered he had access to a whole host of excellent education and resources, online communities, support groups, team fundraisers and events, etc. He felt encouraged that New England had a large Regional Chapter. This was a defining moment because he made a decision to put himself out there and get involved with the IBD community.

In David’s own words, “To push beyond my comfort zone in sharing my IBD journey and to meet other like-minded patients, I joined Team Challenge early on. It was an incredibly positive experience. I participated in Take Steps events. Camp Oasis also caught my attention. I volunteered at the New York and Pennsylvania campsites over many summers. It was humbling to be around these brave young IBD campers.”

David’s initial volunteer efforts and professional career motivated him to become a Support Group Leader. He saw it as an opportunity to give fellow patients the support and information they needed in a more personalized format. Facilitating a group also made him feel less alone.

A long-time participant, Arielle West, co-leads the Maine group with David. He gives her a huge amount of credit for all the heavy lifting preparation she does related to advertising, planning, organizing, and communicating — so participants can have the best experience. David adores partnering with Arielle. They are both passionate in their mutual desire to help make a difference.

I asked David what makes his support group so valuable for adult IBD patients and their caregivers. He said, “We have a great mix of participants, from college aged adults to senior citizens. People come with many of the same questions and feelings. You can open up about your disease with others who understand. Our group is a safe space to share without fear of judgement.”

David is married and has two boys, aged 22 and 19. His oldest is a Lacrosse player and his youngest plays baseball. Dad has often coached on their teams! Much of their family time has revolved around the boys’ sporting events, including traveling across the Northeast for tournaments and championship games. They have loved every minute of it!

Both David and his wife work in the medical field. She’s an Internal Medicine Doctor. He’s a Child & Adolescent Psychiatrist (private practice) and Medical Director at Spurwink, a not-for-profit agency. The family currently has a rescue dog, Fergie, and a rescue cat, Aspen. Soon they’ll be welcoming a French Bulldog puppy into the household!

For more details or to join the Maine support group, email: [email protected].