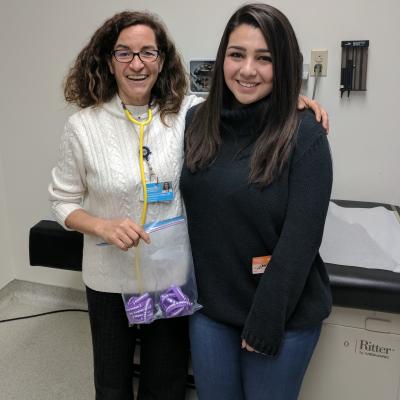 In 2016, my daughter Madelynn (Maddy) was diagnosed with Crohn's disease. In January she began having really bad diarrhea. At first, I thought she had caught the stomach flu from my husband, who had had it the previous week, but the diarrhea continued on and on until we were at the three-week mark. She then started complaining about pain and I immediately knew something wasn't right. I started reaching out to various pediatric gastroenterologists nearby. To my surprise there were none close to where we live in Mission Viejo. We then found a doctor, located in Fountain Valley, CA. She immediately took her in and examined her. She told us that she had to do an endoscopy and colonoscopy to see what was causing all of the pain and diarrhea. Shortly after, Maddy had her first endoscopy and colonoscopy. I will never forget the look on the doctor’s face when she came into the lobby to inform us on her findings. She came over and asked if we could go into a private room to discuss her discoveries. At that point I remember my heart sinking into my stomach and wanting to fall out the back. She said, "Mrs. Hernandez your daughter's entire Gl tract is covered in ulcers. This is either a really bad bacterial infection or beginning stages of Crohn's Disease." I immediately started crying and praying. No parent wants to hear that their child has something wrong with them, let alone a disease that I had never even heard about.

For months the doctor watched Madelynn closely and observed her. She was put on numerous types of treatments. She also had blood and stool samples taken about every other month. At the beginning, Maddy had a hard time taking pills. She was only 14 at the time and was only a few months into her 8th grade year. In order to help her take the pills we would crush them and spread them over yogurt. Well, shortly after that we discovered she was also lactose intolerant, so the yogurt eventually turned into apple sauce, which Maddy isn't very fond of.

Life at the Hernandez home changed very quickly. We couldn't eat certain foods, couldn't go to certain restaurants, etc. I quickly saw Maddy sink into depression and lose a lot of weight. This was super hard as a parent to watch. No parent wants to see their child go through that sort of thing. I felt her slipping away allowing the disease to in a way, swallow her. I had no real support system at the time and I didn't know too much about the disease. I became a research guru on Google. Still learning about the disease, trying to be a parent to two girls, and holding down a full-time job was a struggle. As Maddy was still trying to be a kid and maintain her grades, everything became a challenge, even going to school. Somehow, Madelynn pulled through and came out with straight A's and an honor roll student. She was recognized at school for "beating all odds" and received a prestigious award at the school's "Night of the Stars" ceremony. Her name is currently on a plaque in the school's office reminding us of her achievements.

All of these events took place within the first 6 months of 2016. By July of 2016 Madelynn was officially diagnosed with Crohn's Disease. Now, going into High School was another challenge in itself. She was placed in several AP/ Honors classes and the stress was mounting. As I learned, stress is a huge trigger for the disease. I immediately scheduled a meeting with the school's counselor and Maddy was put on a 504 program because she was missing so much school. We decided together that it was best for Maddy to be taken out of the AP classes so that her stress level wouldn't be so impacted, it helped immensely. As time went on Maddy learned to cope with her disease and to better understand it. She started closely watching everything she would put in her body and went to counseling every other week to learn coping mechanisms.

As time went on Maddy went into remission and was doing better. It was October of 2017 when we went in for a follow up visit. During that visit the doctor mentioned to us that Maddy would be a great candidate for a clinical research study that she was currently working on at Children's Hospital Los Angeles. I asked her what kind of study Maddy would be participating in and she said that it would be a fecal transplant. Of course, my first reaction was not so pleasant. Maddy, on the other hand was intrigued. The doctor immediately explained to us the procedure and the effects of it. We asked her what the reason for doing it was for and if there were any side effects. She said so far in the pediatric children that she had done it on, the results had been great with a minimal amount of side effects. In Madelynn's case it can help reduce the amount of medicine she is taking. Keep in mind we had never done a clinical trial research study before. Maddy immediately jumped at the opportunity and said, "If it's going to benefit not only me but others as well, then why not do it? What do I have to lose?" On November 1, 2017 Madelynn had the fecal transplant. It's been close to one year since the transplant and she is doing great. The outcome has been amazing and has worked wonders for Maddy. She went from taking one and half pills of medication to a half of a pill and now she isn't taking any at all. Maddy said she would absolutely do another clinical research study if the opportunity presents itself to her.

My advice to other parents would be to give clinical trials a try.  That is the only way we are going to assist in hopefully one day finding a cure for Crohn's Disease.  My suggestion would be to speak to your child's doctor, do your own homework, read-up on what exactly the study is for and what it will do for your child, what the side effect may or may not be, the outcome, and how long the trial will last.  Trials and errors are the only way doctors will find a cure and we are all stronger fighting together.  Together we can find a cure!