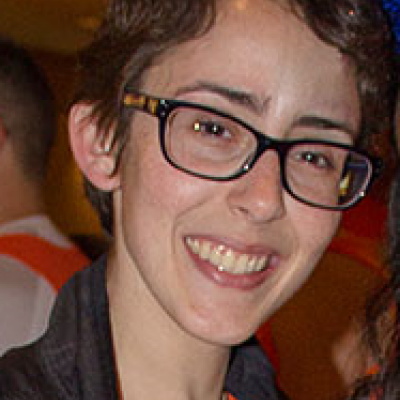 I was diagnosed with Crohn’s Disease at 17 years old as a senior in high school and completely refused to believe that anything was wrong with me. I quickly went through medication after medication until graduating to biologic medications. I had some limited success on biologics but even those medications were not helping to heal my digestive system.

It was incredibly difficult to accept that my life would not be what I had once thought it would be due to Crohn’s. I had to make the heartbreaking decision to stop working as a stage manager, my chosen career path, because I could not give it 100 percent due to my declining health.

Around this same time, I was hospitalized and we learned that I had failed on yet another biologic medication and that there were no other medications for Crohn’s currently on the market. My doctor referred me to a local practice where we met my clinical trial coordinator and the GI doctor in charge of the clinical trials who quickly become my new, and current, specialist.

The clinical trial coordinator and GI spent hours with me and my parents going over what options we had in terms of clinical trials and answered all of our questions. My decision came down to either having surgery to remove my colon or I could pick between two clinical trials. This was one of the scariest decisions I have ever made but I ultimately decided to participate in a clinical trial. I knew that surgery was not a cure for Crohn’s and wanted to try a clinical trial in order to see whether a new mechanism for delivering medication could help me enter remission.

After qualifying for the clinical trial I completed the consent paperwork and officially enrolled. Any fear I still had was quickly dispelled as I was constantly being monitored by the clinical trial staff and I knew that I would be receiving some of the best care I had received since my diagnosis. The medication seemed to be working well and it was a huge shock to find out four months into the trial that it was being cancelled.

Fortunately, in the time it had taken to qualify and be in the trial another biologic was now on the market for Crohn’s which I quickly went on. That medication seemed to work for a bit longer than most other biologics I had been on but I still ended up failing that medication. My first phone call after learning this was to my clinical trial coordinator to see if there were any new trials in which I could enroll.

In the second drug trial I seemed to respond to the medication fairly quickly. For the first time in 11 years my disease was confined to just my sigmoid colon and rectum; all other areas of active disease had healed. After being enrolled in this trial for seven months we found out that it was also being cancelled. Again, I was very fortunate that another biologic medication had been approved to treat Crohn’s and we quickly began the process of beginning that treatment.

I have now been on that biologic for almost two years and had my first major surgery this past June to remove approximately one foot of my colon due to having multiple strictures in my sigmoid colon which is where my disease has remained severe over the last 13 years. For the first time we think that remission will finally be something I will achieve. I do not think that this would have been possible if it was not for the two drug trials I was involved with, particularly the second trial which was the first medication to ever heal any portion of my digestive tract. If I fail on my current biologic, I would not hesitate to enroll in another clinical trial. While the prospect of being in a trial can be scary, without trials there would be no medication approved for IBD. If my participation in a trial can help not only me, but other IBD patients I will always be willing to participate.