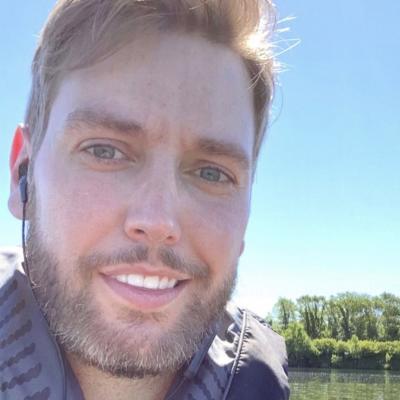 I was diagnosed with ulcerative colitis when I was 21 years old. I initially responded to oral treatments well, but my quality of life began to plummet about a year and a half after I was diagnosed. I was malnourished, had no energy, and I was using the bathroom close to 20 times a day. I was hospitalized with a case of Clostridium difficile (C. diff). At that time, the doctors gave me the option of either trying biologics to calm the inflammation or removing my colon. I chose surgery because I thought it would end the pain and suffering that I had been experiencing without the risk of potential side effects related to biologic medicines.

After my colon was removed and my j-pouch was formed, my symptoms never really improved. I tried multiple types of antibiotics as treatment for pouchitis but some of the antibiotics made me feel even sicker. Eventually I was diagnosed with Crohn’s disease as the inflammation in my digestive tract spread to my small intestine. At that point, I began biologics as treatments in hopes that I would be able to keep my j-pouch.

For a few years, I was able to tolerate the excessive bathroom trips and lack of energy related to the inflammation inside my small intestine. However, by the summer of 2014, my disease had gotten so bad that it affected my feet and I could not even walk anymore. I was scheduled for a surgery to divert my intestines away from my j-pouch for a while, but I fainted in the surgical evaluation room from the fatigue and exhaustion from my disease. I was hospitalized and decided I wanted my j-pouch removed and replaced with a permanent ileostomy instead. My doctors recommended this option in hopes that this would alleviate so many symptoms from Crohn’s disease.

While I knew that my j-pouch removal surgery would require a lengthy recovery, I was not ready for what happened afterward. I was hospitalized for an additional six weeks due to my intestines not waking up after surgery. I had a Hickman catheter put in my chest for total parenteral nutrition (TPN) because I had lost close to 40 pounds since I was not able to eat. I was even more lethargic and depressed after surgery than I was beforehand.

After that surgery, I tried every biologic available and subsequently failed each one. This resulted in me being hospitalized at least once a month for two years due to bowel obstructions and malnutrition followed by six more surgeries. I had run out of options and my doctors told me I was medically refractory (not responding to treatment). I began to accept that my life would just revolve around being in and out of hospitals and operating rooms. My doctors then told me there was a new drug out there that was not approved by the U.S. Food & Drug Administration (FDA). I had to travel approximately four hours to the clinical site and back to get this drug until it was approved. After receiving FDA approval, I would be able to self-administer it every six weeks.

I was initially hesitant to try any biologic drugs because of unknown side effects but I realized that I had no other options. Now I choose not to live my life in fear of side effects because I felt like I didn’t even have a life before I tried many of these drugs. If my current drug stops working for me, I wouldn’t hesitate to try a new drug in order to achieve remission again.

I would tell anyone who isn’t able to achieve remission to not lose hope. We don’t know when a new drug will come along that could possibly change someone’s life. I once gave up hope and didn’t think my life would get better; now, I make an effort to remind myself how good my life is now versus what is was three years ago and I’m grateful that I found a form of treatment that works for me.