I was 22 years old when I was first diagnosed with inflammatory bowel disease (IBD). I felt very isolated as a young South Asian American woman, unable to relate to those around me who were healthy and able-bodied. Even though this disease runs in my family, there was very little knowledge about Crohn’s disease or willingness to discuss my journey. Not only was my diagnosis delayed from my teenage years, due to a lack of understanding of extraintestinal manifestations (in my case, joint pains, ocular inflammation, dermatological issues), but once I did get a diagnosis, many healthcare providers told me they hadn’t ever seen such severity of disease in South Asians. 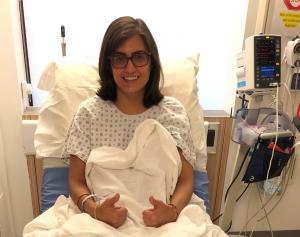 As if that wasn’t hard enough, there was a stigma I dealt with culturally for needing medications and surgery to control my brand of disease, something many South Asians around me labeled as a “diet disease.” I felt like a failure not being able to control my Crohn’s with diet or alternative therapies, and my treatment with immunosuppressants, biologics and surgery was unnecessary delayed as a result.

It was all perplexing and a very lonely journey until I began advocating and met many other South Asians struggling with severe IBD. Some of them even have ostomies and perianal fistulizing Crohn’s disease like me. That’s when my experiences began to feel validated but at the same time, I began to wonder…how common really is IBD amongst South Asians? And were my delays to diagnosis and treatment, in addition to the severity of my disease, really all that rare?

A recent study published in Inflammatory Bowel Diseases—“South Asian Patients With Inflammatory Bowel Disease in the United States Demonstrate More Fistulizing and Perianal Crohn Phenotype”—stresses how much the number of South Asians being diagnosed with IBD has increased. In the U.S. alone, that number has grown 97% from 2000 to 2013. With that growth, researchers designed a study to analyze severity of IBD in South Asians vs. the white population living with IBD.

The study was designed by Partners Healthcare network in the greater Boston area and was set up as follows:

The above-listed aspects were then matched up and compared between the South Asian group and the white patient population. The study found that:

Another interesting finding included that South Asians may be at a unique risk for IBD because mutations in the NOD2 gene—which is linked to IBD in white patients—could not be found in patients studied in India. The distinct genetic profile of South Asians with IBD coupled with certain environmental exposures in the U.S. may influence the diagnosis and management of IBD in this increasingly at-risk population.

Another study, “Comparison of Disease Phenotypes and Clinical Characteristics Among South Asian and White Patients with Inflammatory Bowel Disease at a Tertiary Referral Center,” had somewhat different results. This study was smaller in terms of the number of South Asians included and was conducted by the Crohn’s & Colitis Center of New Jersey at Rutgers-Robert Wood Johnson Medical School:

The above-listed aspects were then matched up and compared between the South Asian group and the white patient population. The study found that:

Additionally, there were differences noted in the time from diagnosis to the initiation of immunosuppressive therapies such as biologics between South Asian IBD patients and white IBD patients. South Asians patients were often less likely to be placed on immunosuppressants and biologics or to try more than one biologic compared to white IBD patients. Again, whether these disparities are due to fundamental differences in the character and progression of IBD between South Asian IBD patients and white patients, or due to other factors such as culture-related perception of IBD and healthcare in general, biases within the healthcare community or the patient community, or stigma/perceptions around needing medications and surgery to treat IBD as was in my case, requires further study.

As a South Asian patient with severe Crohn’s disease, I’m glad we are off to a good start in evaluating South Asian patients in the United States. But so much more needs to be done. I know stigma is a huge component in seeking care and in pursuing therapies. As our population continues to grow in number of IBD diagnoses, I would like to see additional studies to better understand risk factors, exposures, and attitudes toward medical and surgical therapy in the South Asian IBD population. I would also like to see these studies be used towards the development of more personalized medicine for certain racial and ethnic groups who clearly have different phenotypes of IBD.

Tina Aswani Omprakash is a writer for the Crohn's & Colitis Foundation. She is a Crohn's patient, health advocate for the chronically ill and disabled, and founder of the blog Own Your Crohn's.