March 23, 2010 was a memorable day for me. I was working for a U.S. Senator who played a key role in shepherding the Affordable Care Act (ACA) through Congress. I had spent the months prior organizing healthcare town halls and visiting hospitals discussing the issues plaguing our healthcare system. At the same time, I was seeing firsthand just how broken our healthcare system was as I navigated life as the caregiver of someone with a chronic illness. 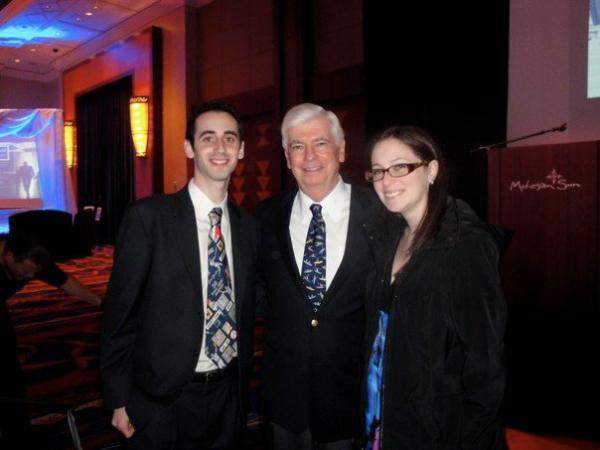 My husband and me with former U.S. Senator Chris Dodd (center)

At the time, I was 23, a newlywed, and thrust into life as a caregiver. My husband was diagnosed with Crohn’s disease three years earlier and wasn’t being treated adequately. He was malnourished, emaciated, and fatigued. He was going to the bathroom up to 25 times a day. His health was rapidly declining, and I was terrified – not just for his physical health but also for our financial health. You see, I was the breadwinner for the two of us on an entry level salary. My husband had quit his job to move to live with me before our wedding and hadn’t found full-time employment. So, we were depending not only on my income but also my insurance.

I remember having nightmares about what would happen if I lost my job – he wouldn’t be able to get health insurance because he had a pre-existing condition. And if that happened, we would have to make really hard decisions – decisions people make every day. Decisions about paying for medication or eating. Decisions ultimately about life or potentially death.

But my fears improved on March 23, 2010 when the ACA was signed into law. Let me first add in a disclaimer – the Crohn’s & Colitis Foundation does not think the Affordable Care Act is perfect. The Foundation agrees that we need real reform of our healthcare system. However, it’s important that we recognize that the ACA was a major step forward, especially for those living with chronic illnesses. This is because the law included several key patient protections, including:

Because of the passage of the Affordable Care Act, 20 million more Americans have obtained health insurance. However, the future of this law, and the protections for patients with chronic illnesses, is up in the air because of repeat efforts to repeal the law.

In 2018, the Attorney Generals of several states filed a court case challenging the constitutionality of the ACA, including the pre-existing conditions protections. This would be detrimental for IBD patients who rely on the basic patient protections to access meaningful coverage and care. The case, known as Texas vs. Azar, has been ruled on in the Fifth Circuit Court of Appeals and is now moving on to be heard by the Supreme Court.

On the 10-year anniversary of the enactment of the ACA, the Foundation continues to be dedicated to improving the quality of life of our patients, and we think more needs to be done to improve the adequacy of insurance coverage and affordability of healthcare services. But true reform cannot take place at the expense of IBD patients. It is critical that basic patient protections are maintained, including the prohibition on discrimination against pre-existing conditions.

We need you to help ensure that your needs are heard by Congress. Join our Advocacy Network to receive updates to take action to protect patient protections and help pass important policies to improve patient access to care.

Rebecca Kaplan is the Public Affairs and Social Media Manager for the Crohn's & Colitis Foundation and the caregiver of a Crohn's disease patient.