The PoopUp: Coming soon to a city near you! 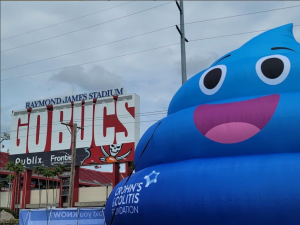 Nothing steals the show quite like a giant, blue, poop emoji-shaped tent. That’s why the Crohn’s & Colitis Foundation created the PoopUp, a mobile museum-like experience to help educate and spread awareness about Crohn’s disease and ulcerative colitis.

The PoopUp not only includes the signature oversized blue tent, but also features multiple interactive exhibits and stations that encourage attendees to learn more about inflammatory bowel disease (IBD) and have honest conversations about symptoms in an effort to destigmatize the diseases.

The exhibits at the PoopUp also explain signs of IBD – such as consistent diarrhea, vomiting, and stomach cramps – to familiarize the public with symptoms of Crohn’s disease and ulcerative colitis and encourage early diagnosis.

The hands-on activities at the PoopUp have been a fun experience for both children and adults to explore. Whether it be lifting toilet lids to learn about stool types or standing behind a transparent block to line up an illustration of the digestive tract with your body, there are several ways visitors can learn about IBD and its symptoms in a fun, educational, and stigma-free environment.

At a Foundation gala in Boston in September and at a Tampa Bay Buccaneers game in Tampa in October, the PoopUp has been a hit among children and adults alike. The PoopUp will continue to pop up throughout the country in 2022 not only at some Foundation events, but also at sporting venues and other local events and locations. Stay tuned to find out where the PoopUp will be next!

The goal of the PoopUp, especially when it is present at major public events, is to make learning about Crohn’s disease and ulcerative colitis engaging, memorable, and shareable (who doesn’t want to post a photo on social media with a big poop emoji?!) for people who may not know about IBD. Combining videos, hands-on activities, and games, the PoopUp is an opportunity for people to get comfortable with topics they may have previously considered taboo and become more educated about IBD and gut health in general.

The PoopUp was made possible by our partnership with AbbVie, Ferring Pharmaceuticals Inc., Janssen Biotech Inc., and Nephroceuticals.