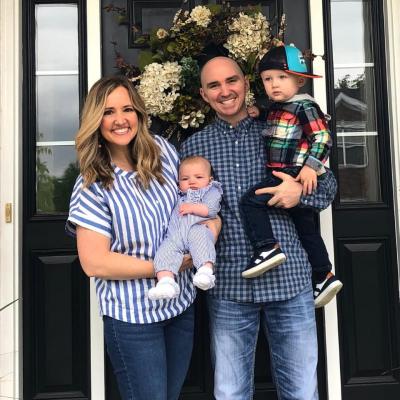 Since the day I was diagnosed with Crohn’s in July 2005, the thought of motherhood seemed like a far-off reality. Through my patient journey, I’ve experienced countless hospitalizations, flareups, tests and maintenance medications. Each setback and time my body failed me, made me questions whether I would ever be able to bring a life into this world.

Fast forward to now, and I have two children. Reid was born in March 2017 and Sophia in January 2019. Both of my babies were born into this world full-term, perfectly healthy. The experience of going through pregnancy and becoming a mom helped me realize that despite the difficulty of living with Crohn’s disease, my body is capable of creating life.

The timing leading up to my first pregnancy was impeccable. I had bowel resection surgery in August 2015. A decade of disease (18 inches) was removed. From that point forward, I was given a “fresh start”. I truly felt pain-free for months on end. I was also newly engaged. With my wedding 10 months away—and with starting a family on my mind—I knew I was in a good position to embark on that journey with my husband.

I underwent a colonoscopy two weeks before my wedding day to ensure there was no inflammation and that my disease was not flaring. I got the green light that I was in the clear and my husband and I got pregnant a month after our wedding day.

I followed that same “protocol” with my next pregnancy—I had a colonoscopy to ensure I didn’t have inflammation going on and once again, my GI gave me the green light to try for baby number two. Unfortunately, I miscarried around 6 weeks, but became pregnant with my daughter, Sophia, two months later.

Pregnancy for me truly helped calm my disease. There were so many moments where I would eat something or feel stressed, but not feel pain in my gut. Gone were the days of running to the bathroom. For the first time since 2005, I felt like a “normal” person.

When you’re pregnant with inflammatory bowel disease you have a team of specialists—your regular OB, high risk OB and your gastroenterologist. All my doctors told me it was imperative I stayed on my Humira and Mesalamine, along with a prescription prenatal vitamin, folic acid and calcium. While I’ll be the first to admit it’s mentally difficult to inject a biologic into your leg when you have a huge belly and feel the baby kicking—it gave me peace of mind knowing I was doing everything in my power to stay healthy and carry to term. You can’t have a healthy baby without a healthy mom.

Following both scheduled c-sections, I started to feel symptoms creep up a couple weeks after I was home. Nothing to the point where I’ve needed to be hospitalized, but the thought of the disease looms over my head more so than before. This time around—I reached out to my GI immediately—and went on a week of steroids to nip the flare in the bud. Luckily, it did the trick.

Some days it’s easier to take care of my kids than others. Two little ones—less than two years apart is a handful, literally! There are moments when I need to put the bottle down mid-feeding and make a mad dash for the bathroom. There are times I want to play on the floor or go for a walk outside, but I struggle to find the energy.

My goal is to stay out of the hospital for as long as possible. Reid and Sophia are my strength and my inspiration to stay strong when the going gets tough. When I give myself my injections I look at their sweet faces and know I have so much for fight for. If you dream of being a mom, don’t let IBD hold you back. The key is going into the pregnancy in a remission-state, and not when you have active disease. Trust in yourself—you’ve endured so much. I had to laugh to myself during the labor and delivery classes when they asked who has had an IV…and I was the only one to raise my hand. You have perspective and know your body better than anyone else. Have faith in yourself and don’t let your disease restrain you from following your dreams, whatever they may be.