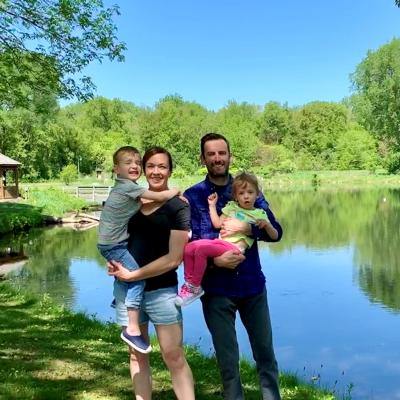 I have a lot to be thankful for, despite the impact IBD has had on my family.

I am thankful that the Crohn's & Colitis Foundation provided me with resources to understand what my loved ones were going through.
When I was 12-years-old, my stepmom, Julie, was diagnosed with Crohn's disease. I didn't know much about it, other than it made her feel really awful sometimes and that she had tons of pills to take every day, along with IV medication every 6 weeks. I have watched someone I love deal with the inconvenience, pain, fatigue, embarrassment and other direct and indirect symptoms of IBD for far too long. Later in life when my husband Ben was diagnosed with IBD, I spent a ton of time on the Foundation's website and am thankful that they have been a constant resource for our family.

I am thankful that my husband Ben has been healthy enough for us to start a family.
Ben was diagnosed with ulcerative colitis during his first year of medical school. Since then, he has failed on every available medication available at the time, and has had several surgeries including the removal of his colon. I have watched over the years as the man I love fights a horrible battle, but has the courage and strength to personally fight back against IBD as a gastroenterologist. Early in our marriage, we were not sure if Ben would ever be healthy enough to be a father. We are extremely thankful that Ben is now in remission, and we have a young son and daughter.

I am thankful for HOPE & support.
Being the wife of an IBD patient can come with a lot of worrying.  Every time Ben says he feels tired, I worry that he's anemic again. Every time he says that his hands, knees, or any joints hurt, I worry that his Crohn's disease might be progressing and the inflammation could be attacking his joints. Any sort of nausea or GI disturbance makes me worry that the inflammation in his intestines is worse, and that he may need more medications or even another surgery.

I got involved with the Foundation & Team Challenge when I felt completely lost and helpless to do anything to help Ben and Julie. It has given me a sense of purpose and a support system like no other. I am thankful for all of the support and knowledge the Foundation has given my family, as well as the HOPE they have given us for a future free from IBD.