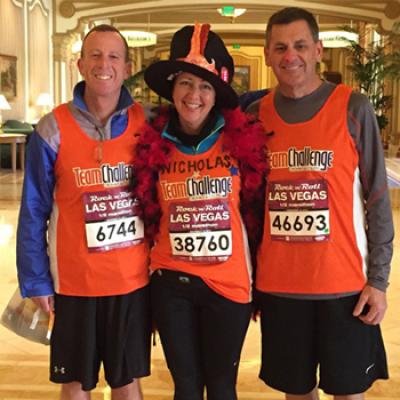 Susan Thomsen is both the mother of an IBD patient and a patient herself, but that hasn’t stopped her from completing more than 10 Team Challenge events.

Susan was diagnosed with Crohn’s disease in 2004, after many years of illness. The diagnosis and planning for managing a chronic disease seemed daunting enough, but she was in for another shock when, less than a year later, her 12-year-old son Nicholas received the same diagnosis.

As both a patient and a caregiver, Susan has experienced firsthand the havoc that IBD can have on the person suffering as well as their loved ones. Her Crohn’s diagnosis abruptly halted her pursuit of a fourth degree black belt in Tae Kwon do, and for Nicholas, it meant delays in his education. While he has continued to excel academically in school, the five hospitalizations, three major surgeries and countless doctors’ visits that he has endured have left him unable to graduate on time with his college class.

Inspired by her son’s perseverance and determination, Susan walked her first half marathon with Team Challenge in 2013. She has continued her involvement ever since - both she and her husband, Ira, have completed more than 10 Team Challenge events, and they've grown their impact by enlisting their kids and friends to join them at multiple events. Susan finds creative ways to fundraise, including selling hand knitted items, each featuring a tag that tells her story and reason for fundraising.

When asked about the effect IBD has had on her family, Susan says, “Crohn’s disease continually hangs over our head. When might the next flare be? What triggers it? What side effects will I have to suffer because of the medicines I have to take? It’s like walking on eggshells.  But I will walk on 13.1 miles of egg shells every year until there’s a cure.”

Team Challenge is transforming lives on the way to cures – join us at an upcoming event!  Learn more!