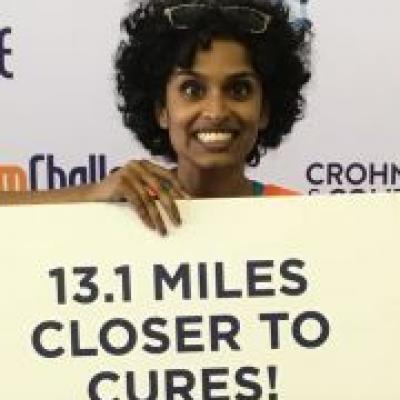 At first I shrugged it off when my surgeon informed me they found three tumors in the inflamed and ulcerated colon they had removed from my body. I figured, they caught it early and it's been surgically removed. It's time to live the rest of my life and discover who I am as a person without the unbelievably high anxiety and stress of having to be near a bathroom.

When my surgeon called me a few days later after the biopsy results to tell me the cancer had spread to some lymph nodes, thus putting me at a stage 3 colorectal cancer diagnosis, a cloud of fear, dread, and uncertainty moved into my brain and my body. She reassured me that although things sounded bad, they weren't as bad as they could be.

Those first few chemo sessions felt laughably easy compared to the 11 years I spent in pain and chronic discomfort with ulcerative colitis. Even in hindsight, being one year and three months out from my final chemo session, my battle with colon cancer seemed easier than my 11 years with UC. Some people, however, are not so lucky.

As the weeks of my treatment wore on, the effects of the oxaliplatin (a drug which I referred to as "the mustard gas") grew more intense. It felt like I had porcupines living in my toes, fingers, lips, and the tip of my nose. I would get dizzy if I sat up too quickly.

My mother stayed with me during my chemo weeks and though I was grateful to have her around, I also felt like a burden. My whole family rearranged their lives to help me fight this battle. I felt very lucky, but at the same time, I was angry and frustrated because as a person in their 30s, I wanted to be in a place where I was able to be the one taking care of my family. Not the person who still needed care.

I am happy to report, that one year and three months later, I have run two half marathons with the Crohn's & Colitis Foundation and raised nearly $6000 towards research and cures. I'm continuing to discover who I am as a person without chronic pain and able to enjoy impossibly beautiful beach sunsets thanks to my trusty ileostomy. I'm also able to navigate through Southern California traffic without having to worry about my bowels.

One year and three months after my final chemo treatment, and the effects have mostly worn off. I encourage anyone with a high risk for colon cancer to get screened early. Don't put off that colonoscopy. As Ben Franklin said, an ounce of prevention is worth a pound of cure.