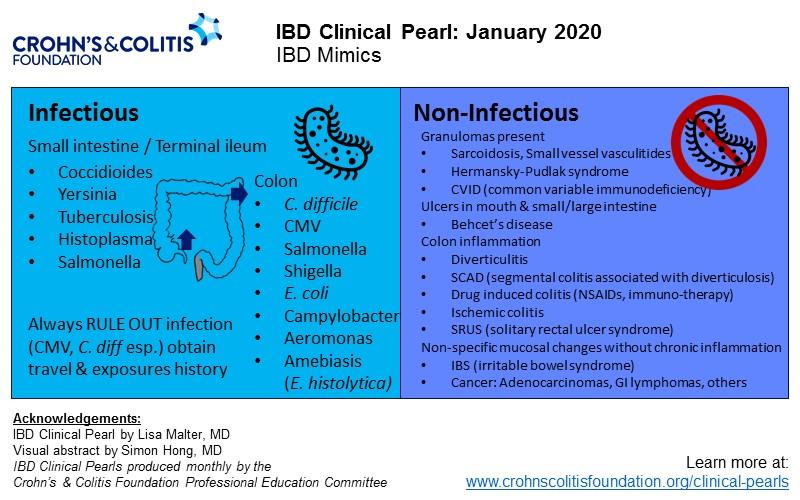 Since there is no single, gold standard diagnostic test for inflammatory bowel disease (IBD) there are many disease processes that can be misdiagnosed as IBD, given its often non-specific symptoms. There is a broad differential diagnosis when considering IBD, however most of the etiologies generally fall into two categories: infectious and non-infectious. Some of these disease states affect a portion of the gastrointestinal (GI) tract which may help differentiate them from IBD and one another. First, we will review the non-infectious etiologies which include autoimmune disorders, vasculidities, ischemia, diverticular disease, drugs, cancer, and radiation-induced disease. It is important to note that while many of the etiologies discussed have histologic changes in colon biopsies in order to diagnosis IBD features of chronicity are warranted.

Granulomatous autoimmune disorders, including sarcoidosis and common variable immunodeficiency (CVID), can have similar presentations as IBD. Sarcoidosis can affect many organ systems, but GI involvement occurs <1% of cases and may present with abdominal pain, bloating, diarrhea, and non-specific endoscopic findings.1 CVID is usually a disease of the sinopulmonary tract but can include enteropathy in ~10% of patients.2 Symptoms include abdominal pain and diarrhea and a hallmark of the diagnostic evaluation is the absence of plasma cells on histology.2,3 Up to 30% of patients with vasculitis can have gastrointestinal manifestations.4 Small vessel vasculidities including antineutrophil cytoplasmic antibody (ANCA)-associated vasculidities including microscopic polyangiitis, granulomatosis with polyangiitis (GPA, Wegener’s granulomatosis), eosinophilic granulomatosis with polyangiitis (EGPA, Churg-Strauss), and immunoglobulin A vasculitis (Henoch-Schönlein purpura) all fall in this category.4  Behcet’s disease may classically mimic Crohn’s disease (CD) with oral and genital ulcerating lesions, with a small percentage of patients presenting with luminal disease, plus additional manifestations that may appear like extraintestinal manifestations.4,5

Hermansky-Pudlak syndrome is a rare autosomal recessive condition where patients have oculocutaneous albinism, bleeding diathesis and other organ specific involvement including granulomatous colitis which can have features like CD. Patients with this condition who manifest GI disease usually have abdominal pain, fever, bloody stool and weight loss.6 The colon is most commonly affected, but like CD, may affect any part of the GI tract.

Intestinal ischemia is caused by reduced blood flow to an area of the intestinal tract, most commonly the colon due to its limited blood supply and the incidence is roughly 16 cases per 100,000 person-years. Patients with colonic ischemia often present with crampy lower abdominal pain and bloody diarrhea and commonly have had endovascular instrumentation, cardiac surgery, extreme exercise or exposure to certain medications.7 Endoscopic evaluation may be utilized to confirm ischemia and rule out other causes. On colonoscopy, gross inflammatory changes are seen including edematous, friable mucosa; erythema; and interspersed pale areas. Biopsies from these areas may show nonspecific changes such as hemorrhage, crypt destruction, capillary thrombosis, granulation tissue with crypt abscesses, and pseudopolyps like CD.8

Solitary rectal ulcer syndrome (SRUS), a form of obstructive defecation (pelvic floor dysfunction), presents with rectal bleeding and incomplete evacuation. On endoscopic evaluation patients can have numerous findings including non-specific erythema, single or multiple ulcers, polyps or mass-like lesions. Anorectal manometry reveals paradoxic pelvic floor contraction, and the presence of collagen infiltration of the lamina propria on histology is pathognomonic for the diagnosis of SRUS.9

Diverticulitis or segmental colitis associated with diverticulosis (SCAD) can both have similar presentations to IBD. Diverticulitis presents with abdominal pain, localized to the left lower quadrant, and may be complicated by fistula, abscess, or stricture. The diagnosis is typically made by contrast-enhanced abdominopelvic CT scanning which reveals diverticulosis and colonic inflammation and complications limited to a single segment of colon. SCAD on the other hand, presents with abdominal pain plus diarrhea. Endoscopically, SCAD is limited to areas where diverticula are present and on histologic evaluation there is no evidence of chronicity.10 Drug induced enteritis and colitis is seen most frequently with nonsteroidal anti-inflammatory drugs (NSAIDs) and immune-based therapies. NSAIDs can cause ulceration throughout the GI tract. Ongoing usage can result in chronicity in histologic evaluation and ulcerations and even stricture development in the small bowel like CD.11 Immune-based chemotherapeutic agents (i.e., ipilimumab) that target a component of cytotoxic T cells can have adverse gastrointestinal events in up to 64% of patients and can present exactly like IBD including similar endoscopic and histologic findings, however these are differentiated based on the correct clinical scenario, namely lung cancer on check-point inhibitor treatment.12

Colon cancer may of course present with similar symptoms including abdominal pain, diarrhea (if there is an obstructing lesion) and rectal bleeding but colonoscopic findings usually assist in separating these diagnoses. Primary colonic GI lymphomas (usually diffuse large B cell), however, can be mistaken for IBD on colonoscopy. These cancers are very rare and usually present in older patients who may be immunosuppressed.13 While they can present with a mass, often they have mucosal ulceration on endoscopic evaluation.

Infections can present similarly to IBD with abdominal pain, diarrhea, and endoscopic/histologic findings (including chronicity) depending on the portion of the affected bowel. We will review organisms that cause disease in the small bowel, the terminal ileum (TI), and the colon.

Coccidiodes is a fungal infection that usually causes lung disease but can have GI involvement in the small bowel and presents with abdominal pain, nausea, and fever in patients that have traveled to or reside in the Southwest United States.14 The infection is diagnosed by biopsy or serological testing. Many organisms can cause disease in the TI including Histoplasma, Mycobacterium, Yersinia, and Salmonella.15 Histoplasma is a fungus that can cause systemic illness and is usually diagnosed in individuals who have traveled to the Ohio and Mississippi river valleys. GI disease is uncommon but characterized by abdominal pain, fever, diarrhea, and weight loss. Ileocecal lesions with Histoplasmosis infection include erythema, ulcers and even stricture formation and this infection is diagnosed with biopsies or serologic testing.16 Mycobacterium tuberculosis (“the great mimic”) may coexist with IBD or mimic CD entirely. It is a bacterial infection that can present with myriad GI symptoms. Diagnosis may be hard to ascertain especially since tissue histology can contain caseating and non-caseating granulomas. PCR testing may aid in making the diagnosis, but it is not uncommon for patients to require treatment for TB prior to starting immunosuppression for CD when TB cannot be definitively ruled out.17,18 Mycobacterium avium-intracellulaire can cause abdominal pain and diarrhea in immunocompromised hosts, however this group does not usually present with new IBD, so this infection is not often mistaken for IBD.19  Yersinia is a bacterial infection caused by ingestion of certain meats and may infect the terminal ileum and cecum causing ulceration and mucosal damage mimicking CD. Histologic evaluation of tissue can differentiate Yersinia from CD as the former has preserved architecture on biopsy.15 Salmonella, a gram-negative rod, can affect both the TI and the colon after ingesting contaminated food or water. Typhoid, characterized by fever, diarrhea, abdominal pain, and possible progression to more systemic disease. Stool culture may help identify this organism as endoscopically and histologically it may be hard to differentiate given TI and right colonic ulceration. Non-typhoid Salmonella infection can present with less severe GI symptoms but can occur concurrently with IBD, especially in those that are immunocompromised because of their IBD therapy.20

Colonic infections besides Salmonella include Shigella, Clostridioides difficile (C. diff), Eschericia coli (E. coli), Campylobacter, Aeromonas and the protozoan Entamoeba histolytica.  Shigella is an invasive, gram negative rod transmitted via the fecal-oral route that causes a left sided colitis and can be detected on stool culture. Patients present with abdominal pain, fever, and watery diarrhea that progresses quickly to bloody diarrhea.20 There are many strains of E. coli that can cause severe illness including abdominal pain and bloody diarrhea and is transmitted via the fecal-oral route. The O157 variant may cause colitis that appears ischemic in nature or with segmental distribution and can be detected on stool cultures.21 Campylobacter is a gram-negative bacterium that is transmitted via contaminated food and can cause abdominal pain, fever, and diarrhea. This infection may result in a left sided colitis like ulcerative colitis, but stool studies are helpful in ruling in this infection. Of note, this infection does carry an increased risk of post-infectious IBS which can make differentiation from IBD more complicated.22,23 C. difficile is a gram-positive bacillus and the infection (CDI) it produces is most commonly seen in patients with nosocomial exposure or recent antibiotic use, but it is increasingly seen in the community and can co-exist with IBD in the absence of clear risk factors. CDI causes diarrhea and abdominal pain with severe cases leading to toxic megacolon.  PCR testing is used to detect this organism.15 Aeromonas is a gram-negative bacterium usually limited to tropical or subtropical areas causing numerous systemic symptoms including GI complaints. Clinically patients present with bloody diarrhea and may have segmental or pancolitis on endoscopy with chronicity on histology like IBD.24 Amoebiasis caused by the protozoan Entamoeba histolytica is transmitted by the fecal-oral route and may cause abdominal pain and bloody diarrhea. Endoscopic findings include "flask-shaped ulcers" with colitis on the left or right colon. Diagnosis can be made with PCR testing and sometimes trophozoites and ingested erythrocytes may be seen on tissue examination.25

Lastly, diarrhea predominant irritable bowel syndrome (IBS) can have clinical features in common with IBD. Patients may report abdominal pain and diarrhea. Lab testing to assess for etiology of the diarrhea should include C-reactive protein level and a fecal calprotectin level (<50mcg/g)  both of which are in the normal range in IBS unlike in IBD.26