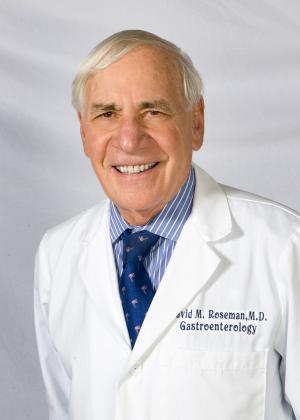 Dr. David Roseman’s distinguished career in medicine spanned over sixty years. Inspired by his uncle, Dr. Burrill Crohn, for whom Crohn’s disease was named, Dr. Roseman chose gastroenterology, with a special interest in Crohn’s disease and ulcerative colitis. In addition to his private practice, he served as Chief of Gastroenterology at the VA and Scripps Memorial Hospital in La Jolla where he later became Chief of Medicine and Chief of Staff for several years. He was instrumental in establishing the Ronny Schwartz Center for Voice, Swallowing and Motility Disorders at Scripps, the first center of its kind. Much-admired and respected by his patients and colleagues, he was designated Physician of the Year several times.

Dr. Roseman was a groundbreaking physician throughout his career. He was one of the first in Southern California to introduce gastroscopy, colonoscopy and other endoscopy techniques, revolutionizing the treatment of patients suffering from Inflammatory Bowel Disease (IBD). These facilitated ulcer detection and management, colon polyp removal and early detection of colon cancer. As Clinical Professor of Medicine at UCSD, he lectured widely on these subjects and published numerous articles in the medical literature and chapters in gastroenterology textbooks. He started a major conference on IBD, now a nation-wide annual event. Dr. Roseman inspired many younger doctors and staff and helped them throughout their careers.

In 1979, Dr. Roseman established with Rolf Benirschke the San Diego Chapter of the Crohn’s & Colitis Foundation (previously known as the National Foundation for Ileitis & Colitis, which he also helped form in 1976). For the San Diego Chapter, he served as Chief Medical Officer and President of the Board. He was also a member of the Foundation’s National Board for eight years. Dr. Roseman recognized that the Foundation is in a unique position to provide education and support for IBD patients in the region, now serving the Greater San Diego & Desert Area. The Crohn’s & Colitis Foundation has been a part of every major research breakthrough since its inception more than fifty years ago, leading to the development of new treatments and medications.

Dr. Roseman’s commitment and dedication to his patients and the Crohn’s & Colitis Foundation have inspired his son Jon Roseman, and daughter Dr. Anne Varick Lauder to establish the Dr. David M. Roseman Memorial Fund. Every year they will select a different Foundation project to support with the funds raised.

This year, the Dr. David M. Roseman Fund has selected to support the Student Research Fellowship Awards program. This highly successful program, already nine years in existence, serves children and adults with IBD by funding and supporting the next generation of leaders in IBD research. To honor of the tremendous legacy of Dr. David M. Roseman, the Fund is committed to furthering the Foundation’s mission through this program in order to foster early-career researchers and to maintain a robust pipeline of those working in the IBD field. We are grateful to The Bern Schwartz Family Foundation for their generous multi-year pledge of $50,000 in support of the Student Research Fellowship Award program.

Our warmest thanks to the following for their generous contributions to the Fund:

To Make a Donation to the Dr. David M. Roseman Memorial Fund