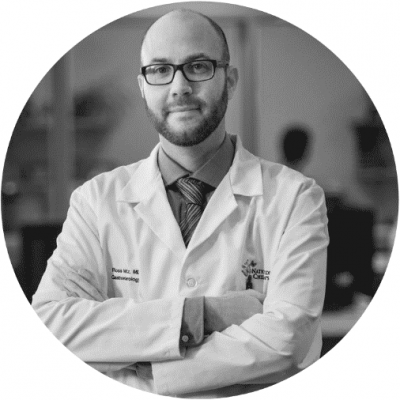 Ross Maltz, MD, is a pediatric gastroenterologist based in Columbus, Ohio. A Crohn's patient himself, he understands the pain that families feel when insurance-mandated step therapy delays quality treatment for a loved one with IBD. That's why he's raising awareness of step therapy reform laws in his state, and calling for the U.S. Congress to pass step therapy reform.

It’s been 25 years since I was diagnosed with Crohn’s disease as a pre-teen, and my diagnosis inspired me to become a pediatric gastroenterologist. When I discuss treatment options with my patients and their parents, I try to think about what I would do if this were me. And I feel the family’s disappointment and anger every time insurance-mandated step therapy delays the treatment we believe has the best chance at treating IBD.

I work hard to deliver appropriate care, which too often means taking on insurance companies that insist my patients try and fail on the insurer’s medication of choice before they’ll cover the treatment we believe will work best. Insurers call this practice step therapy, and navigating it often means weeks or even months of delays due to insurance company driven red tape and complicated appeal processes resulting from denials that go against medical reason.

These needless delays come at a high cost. I recall a patient whose inflammatory bowel disease (IBD) made eating and drinking nearly impossible. Her condition worsened while we appealed to get her off insurance-recommended steroids and onto the targeted biologic we felt could help her. After two months her disease worsened with severe malnutrition and anemia and we had to admit her to the hospital, where we started the biologic treatment. Fortunately, the medication worked, her insurer finally agreed to cover it, and she’s still doing well on it three years later. But she shouldn’t have had to suffer so long or miss school. Her parents didn’t have to lose days of work and income or endure their child’s expensive hospitalization.

Step therapy is problematic in other ways. I’ve treated many patients who do well on a medication, but when a parent changes jobs and insurance plans, they’re again forced to undergo step therapy despite being in remission. This interruption in appropriate care can cause a setback and is particularly cruel for patients with IBD, where damage is progressive and could cause significant complications. No parent should have to choose between a more fulfilling or lucrative job and preserving their child’s health.

I have a phenomenal team that advocates for our patients. But so many doctors must sacrifice time with patients to appeal insurance denials. And when they just don’t have the resources or will to fight, patients suffer. This must change. That’s why I’m joining the Crohn’s & Colitis Foundation in raising awareness of the Ohio-passed step therapy reform laws, and calling for the U.S. Congress to pass step therapy reform. I believe all patients with private insurance should have access to an expedient and medically reasonable appeals process.