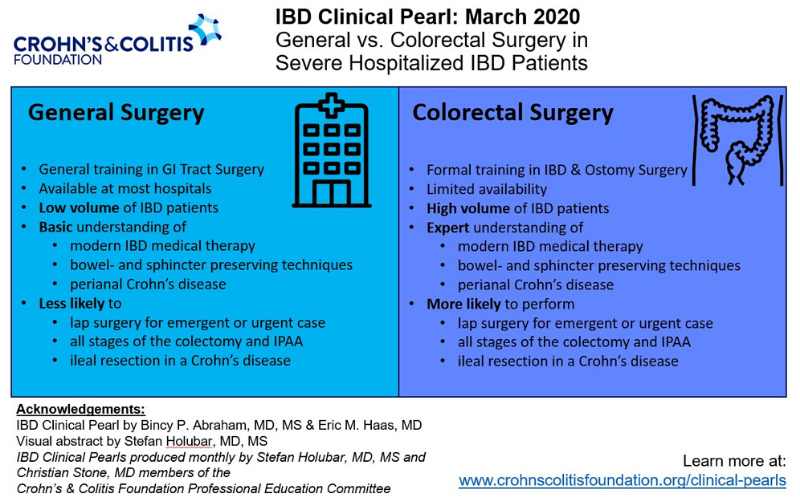 Hospitalized patients with severe IBD are more likely to require urgent or emergent surgery putting them at high risk of poor outcomes.[1]

Thus, it is recommended that patients with severe IBD should be evaluated by a colorectal surgery team rather than a general surgery team for multiple factors (Table 1).

In patients with severe UC, colectomies can be life-saving in those that have been refractory to medical therapy.  The preferred and most common surgery is the staged total proctocolectomy with ileal pouch-anal anastomosis (IPAA).    However, in clinical practice, we often see patients admitted for severe UC have colectomy by general surgeons and later are referred for completion proctectomy and formation ileoanal J pouch by the experience colorectal surgeon. This process can result in a major disadvantage since many of the principles of J pouch surgery can be violated during the initial colectomy resulting in a major setback to the unassuming patient. For example leaving a short rectal stump should be avoided. By the time the patient sees the colorectal surgeon, anatomical changes due to the first surgery can make it difficult if not impossible in certain cases for that patient to undergo successful J pouch placement.

One review that evaluated over 22,719 urgent or emergent colectomies across several indications including IBD show that colorectal surgeons were more likely to do laparoscopic surgery rather than open surgeries when compared to general surgeons.[2] Cases performed with laparoscopic surgery had significantly lower complications rates, lengths of stay, transfusion requirements, and mortality rates as well as lower hospital costs.  The larger incisions following open surgery are more prone to surgical site infections (SSI) and hernias versus the smaller incisions with minimally invasive surgery.  This is especially important in the IBD population who are often on immunosuppressive medications and may be at higher risk for SSI’s at the time of an emergent intervention.

Crohn’s disease patients may also require emergent surgeries including colectomy or resections with re-anastomosis.  Laparoscopic resection for ileocolic Crohn’s disease was also associated with improved outcomes and reduced costs.[3] For those patients that have undergone multiple prior resections, surgery by a colorectal surgeon may spare more intestinal loss and minimize the risk of short gut syndrome based on additional techniques such as strictureplasty rather than small bowel resection. Colorectal surgeons also typically have greater experience and knowledge of the medical options for the IBD patient.  Therefore, they are more likely to delay surgery until evaluation by the gastroenterologist with optimizing medical therapy prior to proceeding too quickly with surgical management.

Although there are always exceptions depending on the general surgeon’s training and experience, if the expertise of colorectal surgery is available, then it is recommended that all severe hospitalized IBD patients be evaluated by them.  However if they are unavailable, for example in a rural setting where only general surgeons are available, either early evaluation by general surgery to assess potential need for surgery during the hospitalization, or transfer to a center where colorectal surgery is available especially in those cases that are quite complex (i.e. multiple fistulas, phlegmon with abscess) should be considered.