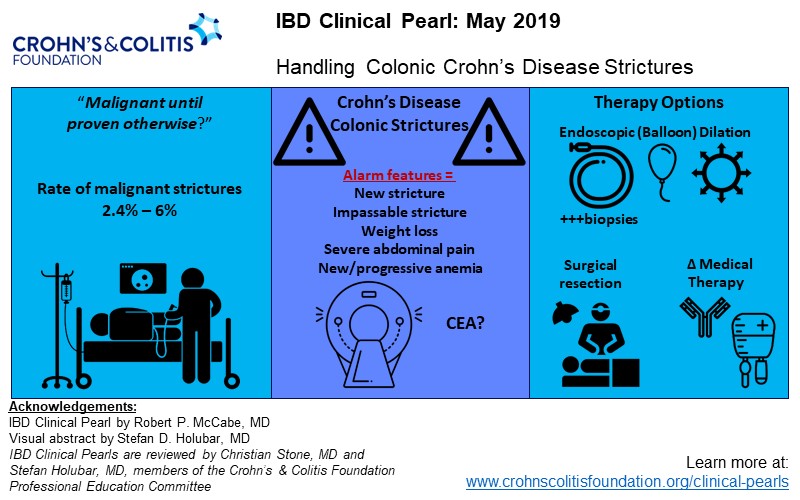 Crohn’s disease is often a stricturing disease and colonic strictures will be encountered. Oral tradition, based on experience and anecdotes, has generally held that colonic Crohn’s disease strictures are malignant until proven otherwise. This thinking was supported by a 1980s survey of Mount Sinai hospitalized patients that found ten (6%) of 175 colonic Crohn’s disease strictures contained malignancy with cancer being associated with shorter strictures and increased disease duration. 1 More recent studies have had less alarming observations. A 2015 GETAID consortium review found cancer in just six (2.4%) of 242 Crohn’s disease colon stricture patients who underwent surgery without pre-op cancer or dysplasia. Disease inactivity was associated with discovery of cancer or dysplasia.2 An analysis of 53,568 patients with inflammatory bowel diseases (including 933 Crohn’s disease patients) with colon stricture in a US histopathology database found no association between low-grade dysplasia and stricture, but a trend was observed towards more cancers in patients with strictures (.32% vs. .09%) 3.

Contemporary studies suggest that there is a low enough risk of occult cancer associated with Crohn’s disease colonic stricture that default recommendation for surgical resection is not warranted. So, what to do with a Crohn’s disease colonic stricture? Well done review articles about Crohn’s disease stricture management focus primarily on endoscopic technique. 4-6 There seems to be limited discussion about a rational approach to the colonic Crohn’s disease stricture. Treatment decisions should be very individualized and directed by as much clinical information as can be collected. Despite recent reassuring findings, cancer must still always be considered, particularly with a new stricture or one which cannot be traversed. Other alarm features such as weight loss, severe abdominal pain, and new or progressive anemia should be acknowledged. Close colonoscopic inspection, numerous biopsies, a carefully reviewed computerized tomography (CT) scan, and the clinical history, should guide physician, surgeon and patient decision-making. Colonoscopy should be performed with the goal of traversing the stricture, even if a small caliber colonoscope or gastroscope is necessary.

An uninflamed stricture, particularly if it cannot be traversed endoscopically and/or other alarm features present, may warrant higher consideration of surgical resection. Colonoscopic dilation, either immediately or later (depending on the pre-procedure discussion) is reasonable, perhaps just enough to allow scope traversal. If an uninflamed stricture can be opened up, numerous biopsies are negative for dysplasia, and imaging is reassuring, then serial dilations, up to 25 mm may be reasonable. 5

If a stricture is overtly inflamed and ulcerated and cannot be traversed, then gentle dilation to allow passage of a small diameter scope is reasonable, again depending on circumstances. If the patient is naïve to medical therapy, has had a gap in treatment, or is undertreated, then escalation of therapy, combined with subsequent dilation will likely be effective. If the Crohn’s disease is refractory to medical therapy, then surgical resection may be necessary, with extent of resection depending on the distribution of disease