Knowing what to expect before your bowel resection and what questions to ask your healthcare team can help alleviate some of the fears you may have about surgery.

A bowel resection is a surgical procedure to remove a portion of your small or large intestine, that has been damaged by Crohn’s disease.

During the surgery, the diseased section of your intestine is removed and the two healthy ends are joined together.

This surgery is recommended to treat a stricture, which is a narrowing in a section of the intestine that occurs when inflammation from Crohn’s disease causes the wall of your intestine to thicken.

Strictures that are left untreated can lead to blockages, which prevent stool from passing through your intestine.

Symptoms of a stricture

This surgery may be also be required if a perforation, or hole, develops in the wall of the small intestine. Inflammation of the bowel wall may cause a perforations as the wall weakens. Perforations can cause a serious infection and must be treated immediately.

What You Should Know about Small Bowel Resection

Small bowel resection is one of two surgical procedures used to repairs strictures. The other procedure is a strictureplasty, which widens the narrowed section of intestine. 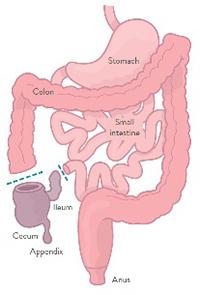 This procedure removes diseased tissue at the end of the small intestine, an area called the terminal ileum, which is often severely affected by Crohn’s disease. This surgery is often required for patients with a stricture, fistula, or abscess in the terminal ileum.

The small intestine absorbs necessary nutrients from digested food into the bloodstream, which provides nourishment for the rest of your body. If too much of the small intestine is removed, short bowel syndrome can develop and cause nutritional deficiencies or even malnutrition.

Other complications of short bowel syndrome can include kidney stones, electrolyte imbalance, bacterial overgrowth in the intestines, malabsorption of medication, and acidosis, a condition caused by too much acid build up in the body.

View our additional resources on short bowel syndrome so that you can recognize the signs and symptoms and know when to seek medical attention.

This surgery is similar to the small bowel resection, except it’s performed to remove diseased portions of your large intestine commonly referred to as the colon but includes both the colon and rectum.

To learn more about surgery in Crohn's disease, watch these helpful videos: