Chronic inflammation in the intestines can cause the walls of your digestive tract to thicken or form scar tissue. This can narrow a section of intestine, called a stricture, which may lead to an intestinal blockage. A strictureplasty is a surgical procedure to repair a stricture by widening the narrowed area without removing any portion of your intestine. 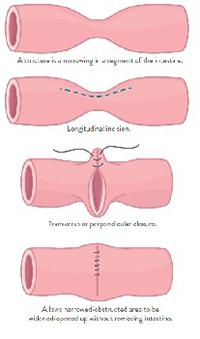 It is important to repair strictures because the narrowing of your intestine could lead to a blockage that prevents stool from passing through the body. When strictures are caused by disease inflammation, initial treatment may typically include medication to help improve the narrowing of the intestines. Surgery may also be a necessary option. Strictureplasty and small bowel resection are two surgical procedures to repair a stricture.

Symptoms of a stricture

What You Should Know About Strictureplasty

Any surgery is concerning, but learning about the procedure can lessen your concerns and give you information to discuss with your healthcare team.

A brochure with information and resources about the different types of GI surgery.
pdf